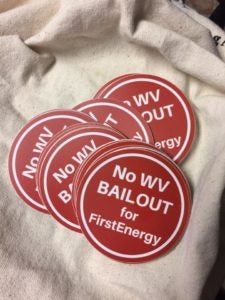 Communities across the country are engaged in battles to take control of where their electricity comes from. These fights have taken on many forms. Solar homeowners are fighting to maintain fair compensation for the electricity their systems generate. Electric cooperative member-owners are working to make the cooperatives more responsive to their needs. The common denominator is that people are tired of powerful interests pushing them around. No better example of this comes from West Virginia, where a diverse coalition beat back efforts to saddle the state’s ratepayers with an unprofitable power plant in an unprecedented victory for West Virginia utility customers.

So, the company decided it would transfer ownership of the plant to utilities Mon Power and Potomac Edison. These utilities are FirstEnergy subsidiaries based in West Virginia. In West Virginia, the retail electricity market is regulated. This means the state’s Public Service Commission (PSC) sets the prices customers pay for electricity. If transferred to Mon Power and Potomac Edison, the Pleasants plant’s costs, including a profit to FirstEnergy, would be paid through customer rates.

This was not the first time such a transaction had taken place. FirstEnergy made a similar transfer of ownership of its Harrison Power Plant in 2013. According to estimates, this transfer cost Mon Power and Potomac Edison customers $160 million in higher utility bills. For the Pleasants transfer to go through, FirstEnergy would need approval from both the Federal Energy Regulatory Commission (FERC) and from the West Virginia PSC.

West Virginians for Energy Freedom (WV4EF) began its work in January of 2017 in response to the looming threat of this power plant transfer. The group is a coalition of economic and ratepayer advocacy groups, faith-based organizations, businesses, and elected officials. Partners included Solar United Neighbors and Energy Efficient West Virginia (EEWV). The Institute for Energy Economics and Financial Analysis provided important technical analysis. Earthjustice provided legal representation for Solar United Neighbors and EEWV before the PSC and FERC.

WV4EF hit the ground running. It began by meeting with key stakeholders in Mon Power and Potomac Edison territory. This included residents, business owners, elected officials, and nonprofit leaders. These meetings were key to building support for the campaign.

The West Virginia PSC is a three-person board, appointed to rolling terms by the governor. It is responsible for regulating West Virginia’s electric utilities, including the rates those utilities charge customers. The Commission’s approval process operates much like that of a court case. Both FirstEnergy and opponents of the transfer provided evidence and cross-examined witnesses in order to persuade commissioners.

FirstEnergy formally filed to make the transfer in March of 2017.

The WV4EF campaign scored an important initial victory in June. In response to requests from WV4EF members, the PSC announced it would hold public hearings about the transfer. In the 2013 Harrison case, the PSC only held one public hearing at its offices in Charleston – outside Mon Power and Potomac Edison’s service territory. But after requests from the public, the PSC decided placing hearings so far from the people impacted by the transfer would be unfair. Parkersburg, Martinsburg, and Morgantown hosted public hearings in September.

“Having good turnout at public hearings in opposition to the bailout was key, because it was an intersection of the grassroots campaign and the legal case,” said Emmett Pepper of Energy Efficient West Virginia. “In some ways, the grassroots work led to those moments. It made real the overwhelming number of letters in opposition to the transfer and made it clear to the Commission that this was not some kind of astroturf, made-up campaign. These were real people who were concerned about their bills.”

WV4EF held rallies before each of the three public hearings. Volunteers, and a street team, papered each hearing location with posters, save the date cards, digital advertising, social media posts, and email alerts. These efforts grew awareness around the issue and drove people to attend the hearings.

Before each rally, groups of local citizens honed their testimony before heading into the hearing room and put on “No bailout for FirstEnergy” stickers to show support. Rally attendees included community leaders from nonprofits and advocacy groups, business owners, and residents. All three public hearings were well attended. Opposition to FirstEnergy outweighed support nearly 2 to 1.

The WV4EF coalition backed its grassroots energy with a solid case as to why the transfer would negatively impact West Virginia. Solar United Neighbors and EEWV worked with experts to identify the cost increases that would come if the transfer were approved. Expert testimony estimated that the FirstEnergy’s sale of Pleasants power plant could cost consumers more than $400 million.

Final arguments were made before the Commission in October. Once this ended, WV4EF launched several mini-campaigns and actions designed to keep up public pressure on the Commission as it was coming to a decision. WV4EF launched an online cost calculator that enabled Mon Power and Potomac Edison customers to see what the deal would mean for them. Users could enter their electricity bill and share their results to spread the word about the transfer. By the end of the case, comments opposing to the transfer outweighed those in support by a 50-to-1 ratio. Morgantown and Lewisburg’s city councils passed resolutions against the transfer. WV4EF launched a fax campaign to thank the PSC’s Consumer Advocate Division for its strong stance and testimony against the deal.

In November and December, the campaign turned its focus to elected officials in the state to ask them to oppose FirstEnergy’s bailout attempt. The campaign earned several strong editorial and op-ed pieces opposing the deal, which appeared in newspapers across the state.

The campaign engaged Runnerstone LLC, an economics consulting firm, to provide industry-specific estimates and targeted research on likely electric bill increases. The firm found that schools, hospitals, and manufacturers in West Virginia could expect Mon Power and Potomac Edison electric bills to increase more than $230 million over the next 15 years if the transfer was approved.

Many months of hard work paid off. In January, FERC ruled unanimously against the deal. It did so because of concerns about cross-subsidization. FERC agreed with Solar United Neighbors and EEWV that West Virginia ratepayers would have been forced to cross-subsidize FirstEnergy, in violation of federal standards. Further, FERC found that Mon Power’s December 2016 request for proposals for additional power plant capacity was biased in favor of Pleasants.

This decision did not close the book on the possible deal, however. FirstEnergy could have appealed FERC’s ruling. Later that month, the West Virginia PSC issued its ruling. While it did approve the transfer, it did so with conditions. These conditions were designed to mitigate risk for customers. In February, FirstEnergy announced it would be dropping its bid, claiming the conditions put forth by the PSC would not be expose FirstEnergy to too much financial risk. In doing so, FirstEnergy essentially confirmed WV4EF’s argument that the transfer would put West Virginians on the hook for the power plant.

“Several factors converged to a victory in this campaign,” said Cathy Kunkel, energy analyst for IEEFA who was also an expert witness in the Harrison coal plant transfer case. “FirstEnergy’s case was even weaker this time. But this alone would likely not have resulted in a victory if West Virginians for Energy Freedom had not organized and educated businesses and homeowners about what this deal would mean for them.”

The WV4EF campaign engaged thousands of West Virginians to take action. People sent comments to the Public Service Commission, wrote letters to the editor, showed up at hearings, and spread the word in their communities. It was an amazing demonstration of the power of grassroots opposition. Campaign coalition members hope to keep the momentum going by continuing the fight for energy freedom.