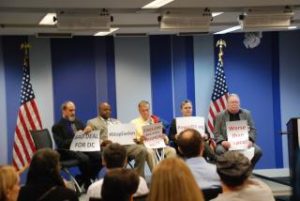 A diverse coalition has come together to oppose the effort by electric generation and utility giant Exelon to take over mid-Atlantic power provider Pepco. The central concern is that Pepco customers will be forced to shoulder the burden of paying for Exelon’s aging and expensive nuclear fleet. This concern arises from the inherent conflict of interest Exelon has by owning significant power generation capacity while at the same time providing power distribution. Advocates are also concerned by Exelon’s long track record of opposing distributed renewable energy.

The opposition campaign is riding a strong wave of momentum. More than 1,500 D.C. residents have contacted the Public Service Commission to express their disapproval of the merger. In addition, 19 of the city’s 42 Advisory Neighborhood Commissions (ANCs) have passed resolutions opposing the merger. The city’s ANCs consider a wide range of policies and programs affecting their neighborhoods. They are the body of government with the closest official ties to the people in a neighborhood. ANCs from each of the city’s eight wards passed resolutions in opposition to the merger. Not one ANC has passed a supportive resolution.

In Maryland, the Attorney General, Brian Frosh issued a scathing rebuke of Exelon’s merger offer. A report issued by his office noted the merger “introduces substantial potential harms” to Pepco customers. It goes on to add: “The only significant benefits accrue to Exelon and PHI (Pepco) shareholders and corporate officers — not the State or Maryland customers.”

A study by the Institute for Energy Economics and Financial Analysis explains why the merger is such a bad deal for ratepayers:

The high price that Exelon proposes to pay for Pepco—$2.5 billion more than the net book value of Pepco’s assets—will put pressure on Exelon to extract as much value as possible from the acquisition. This increases the risk of rate increases for Pepco customers and stems from Pepco’s ownership interest in nuclear generation. Exelon has a fiduciary duty to its shareholders to ensure and enhance the profitability of these assets. Its interest in doing so does not necessarily align with the interests of D.C. electric customers, either in terms of rates or in terms of policy.

Exelon’s need to support its nuclear generation business line also comes into conflict with the region’s renewable energy goals. Exelon opposes paying the owners of solar panels a fair price for the electricity their systems generate through its opposition to net metering. It has also opposed state RPS laws that create markets for renewable energy by putting these sources on a more level playing field with incumbent energy sources.

This fight is expected to continue for several months. Exelon and Pepco must prove to Public Service Commissions in Maryland and D.C. that this merger will provide a public benefit in order for it to be approve. Advocates will continue to show that it does not.