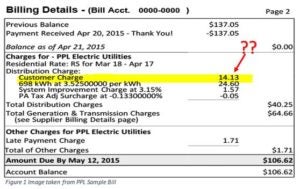 If you’ve ever looked closely at your electric bill, you’ve probably noticed something called a “customer charge,” often buried on the second page and listed between several other often confusingly-named charges. Your bill is made up of volumetric charges, or charges based on how much electricity you consume, and fixed charges, like the customer charge, which are independent of how much electricity you use.

As more and more Americans improve the efficiency of their homes and install rooftop solar, they are buying less and less electricity. To utilities, this means that their revenue is declining while the cost of maintaining and improving their grid is fixed. To protect their profits, utilities across the country have responded by trying to raise fixed costs, which guarantee them revenue regardless of customer consumption.

If that sounds unfair to you, you are not alone!

Higher fixed charges mean less consumer control over their energy costs. And, like any flat charge, low-income customers are the most impacted (because electric bills are a much higher share of their income than other customers). Fixed charges also discourage people from goings solar by artificially raising your electric bill no matter how much of your energy consumption is offset by your solar system.

Utilities often defend the fixed charge increases by saying solar homeowners are receiving an unfair subsidy from other utility customers—including low-income customers who can least afford it. But the roots of this story, found in a 2013 report from the Edison Electric Institute (EEI), a trade group representing electric utilities, shows where the utility’s real interests lie. That report described the threats posed to the utility business model by distributed solar and other disruptive technologies and recommended a response. The excerpt below sums up the core argument:

In truth, the fairness argument doesn’t hold water. Solar homeowners, by reducing the electricity they buy and producing electricity much closer to where it is used, cause less wear and tear on the grid. And if you count the other benefits of solar, from improved air quality and human health, to job creation, to more resilient grids, it turns out that solar is actually more valuable than the cost of grid electricity.

But utilities are right about something: when the utility business model is based on selling more energy, anything that causes customers to buy less energy is a threat to their bottom line—no matter how beneficial it is to homeowners or society. The response to this conflict should be to figure out a new business model that doesn’t pit utilities against rooftop solar.

Fighting back against fixed charges: Solar United Neighbors is here to help!

Utilities in Pennsylvania are regulated by the PUC, and any request to raise electric rates must be approved by them after considering public input. Solar United Neighbors mobilizes solar supporters and solar homeowners to oppose anti-solar measures under consideration by PUCs and we often win!

This is already happening in Pennsylvania. Duquesne Light, the utility that serves parts of Allegheny and Beaver Counties, has asked the PUC to raise rates, including the customer charge. We are gathering supporters to sign our petition and show up to hearings and tell the PUC that fixed charges are unfair. If you are a Duquesne customer, I encourage you to join us and make your voice heard.

And if you’re not a Duquesne customer, stay in touch! We’ll be there to help should the specter of fixed charge hikes appear in your neck of the woods!