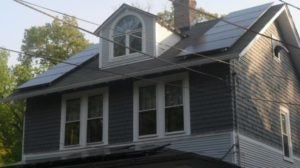 At the end of last month, Governor Hogan vetoed the “Clean Energy Jobs” bill. Despite a dozen years of positive evidence of the policy’s effect on the Maryland economy and job creation, the governor opted for a veto. The bill would have increased the state’s Renewable Portfolio Standard. This includes an increase to the “solar carve-out”. This piece of the bill would encourage the installation of solar power in the state.

The Renewable Portfolio Standard is the mechanism by which the state requires all electric companies to either produce a certain percentage of their energy from renewable sources or purchase qualifying credits. Solar energy producers, like homeowners with solar on their property, produce a form of these credits called Solar Renewable Energy Credits (SRECs) that they can sell on a market. Due to increasing solar supply (as Maryland’s solar economy expands) the value of these credits is dropping faster than planned.

The expansion of the solar carve out by this bill would help to support SREC prices and encourage additional solar investment. The bill passed both houses this spring with a majority sufficient to override the governor’s veto. It is likely it will become law in 2017 when the legislature is back in session. In the meantime, the governor’s action sends a mixed signal on the state’s support for renewables and lower SREC prices may soften the demand for solar throughout the state.