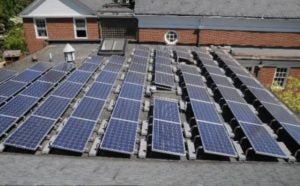 Most of the electricity we use is generated remotely and brought by high voltage transmission lines to population centers. From here it is distributed to customers. Each element of this electrical grid is centralized. This limits choice and participation by us, the consumers.

As the grid developed and expanded across the country in 20th century, centralization was essential to bringing down the cost of service. This way of delivering electricity is changing. Distributed solar energy, wind energy, and electrical storage are pushing changes to electrical grids and the rules that manage them. Together, these technologies, new markets, and new rules will become the Grid of the Future (GOTF).

Thoughtful conversations are taking place around the country on what a re-shaped electricity grid looks like. Organizations like the Institute for Local Self-Reliance advocate for a grid that embodies the principles of Energy Democracy. This means a grid that is economically beneficial to all electricity users by empowering them to control where their electricity comes from.

Other voices, like former Federal Energy Regulatory Commission (FERC) chairman Jon Wellinghoff, have proposed guiding principles as reforms are considered across the country. Similar to the concept of Net Neutrality on the Internet, Grid Neutrality would ensure a level and open playing field in the grid of the future with such concepts as “The Transparency Principle” which would “promote and protect open standards, data access and transparency to encourage sustainable innovation on the grid” and “prevent any single party – public or private – from abusing its influence”.

In states across the country, from Hawaii and California to Massachusetts and New York, efforts are underway to re-make or reform the electricity grid. In New York, that is effort is called Reforming the Energy Vision (REV). A variety of stakeholders, including utilities, regulators, and renewable energy advocates, are participating in a multi-year process orchestrated by the state Public Utilities Commission. Organizations like the Energy Democracy Alliance are working through that process to ensure that key principles such as ensuring that the “key pillars of our energy future should be energy efficiency, conservation, climate resilience, and public or community owned or controlled renewable energy assets.”

Improvements in decentralized wind and solar technologies mean that many more consumers can now benefit from renewable energy’s cost savings and reliability, provided the new grid systems are designed to support broad consumer participation. We should all have a say in how energy delivery systems function, who can participate, and who can benefit.