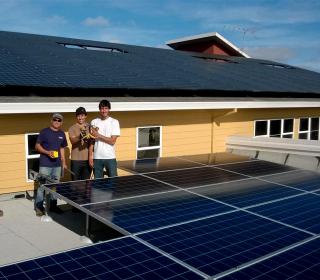 Solar can provide long-term energy savings to non-profit organizations. These savings can then be reprogrammed to serve the non-profit’s mission. Despite the potential benefits, few non-profit organizations have gone solar. Everybody Solar’s mission is to change this. The group recently finished two installations. One system was installed on a California homeless shelter, another at a children’s science center in New York.

“A lot of the organizations we work with don’t have strong solar knowledge because that’s not what their business is,” said Youness Scally, Everybody Solar’s Executive Director.

Scally started the organization with several friends who were interested in making a difference with clean energy.  They started attending solar conferences and realized that they could fill the niche of educating non-profits about solar and helping them pay for the systems.

Sonoma County, California’s Committee on the Shelterless (COTS) worked with Everybody Solar on the installation of a 20 kW solar array. The system will reduce the organization’s electricity costs by about $8,000 per year. Everybody Solar launched a crowd-sourced fundraising campaign that generated $50,000 in donations for the system. Additionally, they partnered with a local inverter manufacturer, solar panel maker, and installation company to cover the cost of the system.

“Organizations want to be more efficient, but they don’t have the resources to invest in the front end, that’s where Everybody Solar became so important,” said Mike Johnson, Committee on Shelterless CEO. Everybody Solar was a central player in the campaign. Without them we never would have gotten this done.”

COTS’s facility did have an existing older solar system. The old system only covered a fraction of the organization’s electricity needs. Working with Everybody Solar, COTS realized that by expanding their system they could save significant additional income. This is due to California’s tiered energy rate system. Adding more solar generation reduced the building’s energy use enough to allow COTS to be charged under a less expensive rate tier.

Everybody Solar deployed several different tactics to meet its fundraising goal. It held a bar-takeover night where all the tip money raised went to the project. The project’s solar installation partner dedicated a $100 for every sale it made in one month to go to the project. This raised $17,000.

Johnson said this fundraising effort meant the organization only paid $8,000 out of pocket. The organization can reprogram the money it will save to the services it provides to the community.

Everybody Solar has looked to develop its own donor base separate from those of the non-profits with which it works, Scally said. This is done so that the non-profit organizations do not feel their donor list is being cannibalized for the solar project.

Everybody Solar makes use of several online tools to expand the geographic reach of its donor base. This includes social media and a quarterly newsletter. The organization also received a grant from Google to make use of the company’s AdWords paid search platform. This enables Everybody Solar to access to free ads on Google that appear when people use selected search keywords.

Scally says his organization is eager to grow. It has now completed four projects with non-profits. It hopes to finish a fifth next year. In addition to more projects, the currently all-volunteer organization is looking to add a full-time director.

“This is the kind of effort and partnership that will make a big difference going forward for the nonprofit world,” Johnson said. “Bringing together community partners, using crowdsourcing, is a beautiful model. The more traction it gets, the better off we’ll be.”