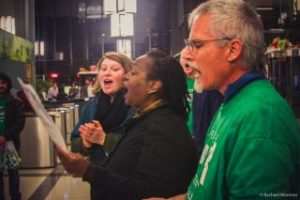 The Earth Quaker Action Team (EQAT) is using a sophisticated direct action campaign to urge PECO, Philadelphia’s utility (owned by the utility giant Exelon), to shift to locally generated solar power. Its goal is to convince PECO to source 20% of its electricity from solar by 2025. Further, it wants this solar power to be built in North Philadelphia as a way to create jobs and local economic benefit. EQAT has strongly tied the economic benefit potential of solar in its campaign.
EQAT was founded to use nonviolent direct action to drive social change at the intersection of social justice and the environment. It sprang as a result of a 2009 meeting of activists who felt called to work on climate change issues. The group draws a good deal of tactical inspiration from the civil rights movement.

EQAT’s first action was a successful effort to convince PNC Bank to divest from mountaintop removal. “[After the success with the PNC campaign] there was a strong appeal to do a “solutions campaign”, not just campaigning against bad actors,” Eileen Flanagan, EQAT member said.

She said that solar came up early in the group’s discussions. There was also interest in finding an action that would address racial and economic injustice issues in their community. The group decided that pushing for rooftop solar in North Philadelphia would be a way to address these issues because of solar’s ability to create good local jobs.

The group launched its campaign last September by meeting with PECO. The group told the utility upfront that it would be engaging in a direct action campaign and explained why it was doing so.

The initial tone toward PECO was friendly. EQAT’s goal was to provide PECO an opportunity to do something positive, so the group remained non-confrontational. In February, EQAT publically served notice to PECO CEO, Craig Adams, that the group would engage in a public campaign to urge the company to adopt more solar power. It gave PECO a May 2 deadline to reply.

In March, EQAT held a “teach-in” at PECO headquarters. The group joined with Philadelphians Organized to Witness, Empower & Rebuild (POWER) a citywide interfaith organization dedicated to improving quality of life in the city. This relationship makes sense as POWER had been campaigning on similar issues around social justice and green jobs.

This week, EQAT gathered outside of PECO headquarters for an ‘open-air strategy session’ that seeks to expand efforts to the Greater Philadelphia region.

The group holds monthly meetings to share information and organize its next actions. These meetings are open to the public. “One of the strengths of the group is that it is intergenerational,” Flanagan said. “At a typical action we have people in their teens and twenties up to their eighties.”

EQAT’s efforts are already gaining some traction. PECO recently announced it would be holding a “solar collaborative” meeting with local solar stakeholders. The utility announced it would use the meeting to discuss ways to increase local renewable energy development.

Flanagan remains hopeful that EQAT’s efforts will be successful. “It really only takes a relatively small group of people being persistent, creative, and bold to pull away the curtain from the wizard and challenge what they are doing,” she said. “That’s the part that is important, ordinary people can shine a light what corporations are doing.”