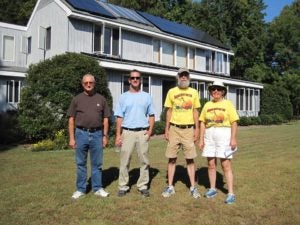 Virginia Beach/South Hampton Roads Solar Co-op partner Hampton Roads Solar Tour has been educating locals about solar for nearly a decade. It began when Ken Wright, a retired engineer and solar enthusiast, brought together half a dozen solar homeowners in 2005. They organized a tour and opened their homes to people interested in seeing how solar worked.

“Tour goers are surprised to see the simplicity of solar panels mounted to the roof, out of the way, making no noise and needing no maintenance,” said Brendan McBreen an organizer of the tour.” “When the homeowner shares examples of his or her utility bills, which are discounted by the amount of electricity produced each month, tour goers see first-hand the value of solar.”

Last year 30 homes were featured on the tour. This is of the roughly 200 solar-equipped homes in the region. Each year, different homeowners participate in the Solar Tour. More than 500 people participated in the tour over the past two years.

In addition the annual tours, the group seeks to educate the public on the benefits of solar power. Group members participate in community events, give presentations, and publish educational handouts. Next month in September, they’ll have members sharing their solar expertise at the Go Green Expo in Newport News, the Riverfest at Nauticus in Norfolk, and the Sustainable Living Expo in Virginia Beach.

The Hampton Roads Solar Tour is part of the National Solar Tour, sponsored by the American Solar Energy Society, which takes place in hundreds of cities across the U.S. during the first week of October each year.

“Sign up for our newsletter at website www.hrsolartour.com,” Brendan said. “Check out our calendar of events, or stop by at our next meeting – there’s usually free pizza!”

The group is eager to welcome new members to the group. It meets meet on the third Tuesday of every month.