This post was written by Forrest Watkins, a Development & Grant Writer with Solstice 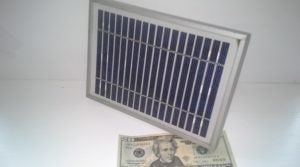 Today, nearly four in five American households are effectively locked out of rooftop solar. Some simply have trees shading their roofs, or their roof faces north or east. Many are renters, or can’t afford the upfront costs and don’t have the credit score to secure financing.

Whatever the reason, this reality is especially pressing for low-income households, who are disproportionately excluded from the rooftop market. The savings that results from participation in the solar market also make a much bigger difference for lower-income individuals, who spend three times as much on their energy bill as their wealthier counterparts as a portion of income.

But now, a Boston-based social enterprise called Solstice has a new way to bring more equity to the solar market.

Community solar has long been touted as a way to bring solar access to more Americans, and for many, it already is. It allows people on fixed incomes, for example, or who have little in the way of savings, to subscribe to a local solar farm and save on their electric bill, without the need to pay upfront costs or secure long-term financing (as in the case of rooftop solar).

And now, as developers increasingly waive the penalty fees that they charge in cases when customers default on their bill or move away, organizations like Solstice that work to enroll subscribers in community solar farms are also noticing a rise in participation by renters and other low-income groups.

Unfortunately, a major financing barrier remains to true energy equity: the credit score. In an attempt to gain assurance that they will earn their money back, the individuals who provide upfront funding for community solar projects typically enforce credit score minimums for their projects. However, early data suggests that community solar subscriber defaults are rare, and there is little data to suggest that there is any strong correlation between credit scores and energy bill default rates.

Beyond questions surrounding their accuracy, significant equity concerns surround the use of credit scores as a method for qualifying households. First, more than half of all Americans can’t meet the credit score requirements typical for solar installations (both rooftop and community solar), and second, low-income individuals and people of color are more likely than higher-income white folks to be excluded as a result.

The question that Solstice’s founders asked themselves was this: if a low-credit or credit-invisible household pays their electricity bill on time every month, why couldn’t they be trusted to receive discounted electricity through a community solar garden?

The solution that they came up with was an alternative qualifying metric, called the EnergyScore. Drawing on nearly half a million anonymized consumer records, this algorithm uses utility payment history and additional consumer information to qualify individuals for community solar farms. And the results are positive: the EnergyScore is both more accurate than credit scores in predicting an individual’s future payment behavior and more inclusive of qualified low-income individuals.

For too long, our energy systems have privileged certain communities over others, leaving historically marginalized communities to deal with insecurity and disproportionate health impacts from fossil-fueled pollution. Distributed, renewable energy resources like community solar represent an opportunity to change this dynamic, but not a guarantee. Only with inclusive structures like the EnergyScore in place can we ensure an equitable, renewable energy future.

You can learn more about Solstice’s EnergyScore and dive into all the fun, technical nitty-gritty here.