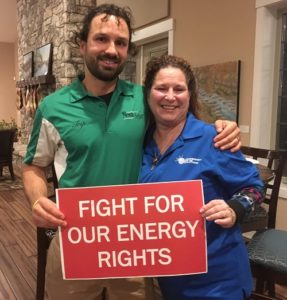 We’ve previously posted about why Virginia’s monopoly utilities fight against your solar rights and what the policy outcome looks like when they do. Now it’s time to focus on how they do it.

While policy decisions made in Washington, D.C. can affect your right to go solar—by changing federal tax incentives or imposing new import tariffs on equipment and materials, for instance—most important rules impacting your solar rights are made at the state level. In Virginia, new solar laws are made in Richmond, and originate in one of the two houses that make up the Virginia General Assembly: The House of Delegates and the Senate. Bills must pass both houses before they can be signed into law by the Governor.

Each legislative house has a series of committees that oversee proposed laws on different subject areas. Committees are controlled by a Chairperson from the majority party, who can largely set the agenda for the session—which bills are considered by the committee, which bills get hearings, and which bills are voted on before being considered by the full legislative body. In both houses of the General Assembly, all energy related laws—including solar policy—must go through the Commerce and Labor Committee.

That means that a handful of legislators—22 Delegates in the House and 15 Senators—can act as solar legislation gatekeepers, wielding immense power over all solar bills introduced. And the Chair—Del. Terry Kilgore (R – 1st District) in the House and Sen. Frank Wagner (R – 7th District) in the Senate—can single handedly control the fate of solar bills in the General Assembly.

Monopoly utilities use their influence

If we can figure out who has the power make or break energy legislation in the General Assembly, so too can the monopoly utilities.

In particular, Dominion Virginia Power has a well-documented history of spreading around political and charitable contributions with the goal of influencing policy outcomes. Unsurprisingly, many of these donations wind up in the pockets of the most powerful legislators—including Del. Terry Kilgore and Sen. Frank Wagner, those key committee chairs we mentioned earlier. In other words, monopoly utility interests can target their donations around key committee members and chairs to block your solar rights. For a more in-depth breakdown about campaign contributions from Dominion and other electric utilities to key legislators, check out this post from Power for the People VA.

The result is predictable: The Commerce and Labor Committees disproportionately represent monopoly utility interests over the interests of their constituents—including current and future solar homeowners. That’s how sessions end with sensible solar bills killed without ever receiving a hearing while the bills favored by monopoly utilities sail through the process and become law.

Working together, solar supporters can fight back

While it can seem intimidating to stand up to powerful groups like monopoly utilities, it’s important to remember that we’re all in this together. We must join together to hold the utilities and politicians who put profits over people accountable. Here’s what you can do.

First, sign our “Represent Us, Not Utilities” petition to let your elected officials know that you won’t stand for monopoly utilities continuing to rig the system in their favor. We can no longer accept an energy system that puts shareholder interests over the interests of the public.

Second, use this tool to find out who your representatives are in the Virginia Legislature. You can click on “more info” to see which committees they’re on to see if they are one of the “solar legislation gatekeepers” in the Commerce and Labor Committee of each house. Then send them our Virginia Declaration of Solar Rights to let them know that you’re a solar voter who expects them to represent the interests of current and future solar homeowners in Richmond!

Finally, help us grow our solar movement. By taking action with Solar United Neighbors of Virginia, you’ll be notified about future opportunities to fight for your solar rights. But, in order to be successful, we need to make sure our solar movement continues to grow. Tell your friends, family, and colleagues about the fight for energy freedom and solar rights and share this article so they can join us in taking action today!