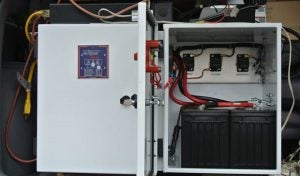 Pairing solar installations with battery storage is an attractive idea for many people who are thinking about going solar. Battery storage provides piece of mind that even if you are unable to get electricity from the grid (e.g. during a storm) you will still have power.

Despite this benefit, battery storage remains an expensive proposition for many. At the same time, the market for batteries is growing rapidly. This rapid growth is coupled with quickly declining prices. So, even if battery storage may not pencil out for solar customers today, it is possible it will in the near future. Fortunately, solar systems can be built with the addition of a future storage system in mind.

When building a system for future storage, it is important to make sure your grid-tied inverter’s power rating doesn’t exceed that of a future battery. Battery sizes range from 4,000-7,000 watts. So, let’s say you have a 9,000 watt system, you would want to purchase two smaller inverters, say 6,000 and 3,000 watt ones, rather than one 9,000 watt inverter. This will allow you to rewire the electricity from the smaller inverter into your future battery system.

This can be accomplished through AC coupling. AC coupling refers to the interface between the solar array and the inverter. This takes place physically in your home’s circuit panel. The battery installer will add an additional breaker panel that covers the outlets that can be powered with the electricity stored in your battery system. These outlets will be the ones connected to your “critical loads” such as your refrigerator.

There is an added cost to having two smaller inverters, rather than one larger inverter. The cost will vary, but expect to pay between $500 and $1,000 for the two smaller ones.

It is also possible to connect systems that use micro inverters to batteries. The key is to arrange the strings in a way that a portion of your system is set up to send electricity to a future battery system.

If you are thinking about adding battery back up, let your installer know before they install the system. This ensures they will design your system to be storage compatible and to minimize the additional work that would have to be done to install batteries when you do decide to add storage.