Billy Weitzenfeld is an energy professional and solar advocate based in Floyd, Virginia. He serves as the executive director of the Association of Energy Conservation Professionals (AECP), is an acting board member of Sustain Floyd. Billy was also a community partner for Solar Untied Neighbors “Solarize Floyd” program helping residents in Floyd, Virginia go solar as a group. We asked Billy a few questions about his unique home set-up designed to maximize a small solar system with energy efficiency measures. 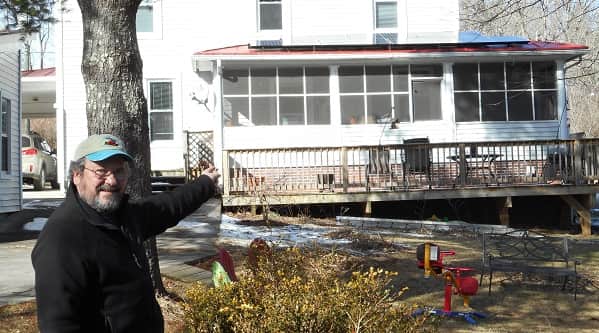 I have a 1.995 KW rooftop and grid tie system with seven panels plus seven micro inverters. Each panel is rated at 285 watts. (Editor’s Note: 1.95 KW is less than 1/3 the size of a typical residential solar system] Because of the larger size and age of the house, the system produces about 15% of our annual electricity used.

After performing an energy audit, we discovered that the home was well insulated. However, many other issues caused it to use a lot of energy

So we got to work and replaced the old oil furnace with an Energy Star heat pump, put in a new ducts system and performed air sealing. We lined the chimney and added an EPA certified woodstove as back-up heat. Replaced existing lights with LED bulbs, replaced major appliances with Energy Star certified equipment, and added Energy Star double paned windows. Additionally, all toilets, faucets, and showerheads replaced with low flow and flush Water Sense equipment.

What factors did you consider when determining the size of your solar system?

The size of the solar system was determined by the only suitable roof space we had, which was the back porch. This was not an optimal place for solar due to large shade trees in the yard. In my energy work, I have promoted renewable energy for over 20 years, while also having solar panels and a 1 KW wind turbine powering my office for several years, but never anything on my own home. So, it was just time to do something, even though it was not a perfect situation. The real value is that I can now say I generate my own energy on my roof.

What are the most impactful steps that a homeowner can take to improve energy efficiency?

The combination of energy efficiency—which is technology based—and energy conservation—which is behavior based—is the best way to maximize opportunities to lower consumption and reduce your electric load before you install a solar system. Ours will never be a net zero-energy home (a home that produces all of its energy on site), but making it as energy efficient as possible allows us to maximize our solar energy output.

What would you say to someone who thinks the only way to go solar is with a large, costly system?

I would have loved to install a much bigger system but was not able to. At one point, we even had decided that it was simply not an option. Ultimately, we removed and trimmed some trees, and realized that there was now a better opportunity to consider solar again.

Our small system will save us money on our bill, but more important is the knowledge that I am finally walking the walk and participating in the clean and renewable energy revolution. It feels good.