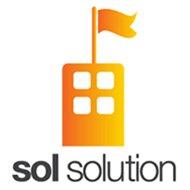 As part of a NEW series of profiles on CPN members, I spoke with Samantha Go of SolSolution about the nonprofit’s work helping schools go solar. Samantha and I talked about SolSolution’s model, some of the barriers they have encountered, and how they’re overcoming these barriers. 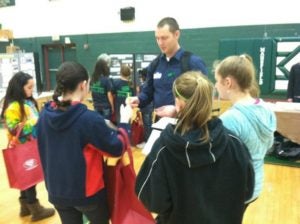 SolSolution is a nonprofit social enterprise whose mission is to simultaneously generate clean, renewable electricity and increase the quality of education in underprivileged schools. The nonprofit has adapted the traditional for-profit Power Purchase Agreement (PPA) model, which has driven the growth in the solar industry for the past decade. Under their 20-year “Educational-PPA”, schools purchase solar electricity from SolSolution, which owns and operates the solar PV system. SolSolution then reinvests the profits from the PPA into educational programs focused on solar, science, technology, and green entrepreneurship education.

The electricity cost savings under the E-PPA varies by school, depending on the school’s current electricity pricing, net metering policies, average and peak usage, size of the system, and some region-specific policies. Regardless of the system size, however, SolSolution guarantees that schools will have a lower electricity bill each month. They also guarantee a stabilized, predictable electricity rate over the 20-year lifetime of a PPA, which protects schools from fluctuating electricity prices. Samantha says these are two aspects of their approach that are particularly compelling for schools. 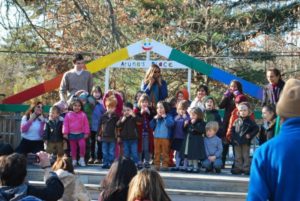 In response to this barrier, SolSolution creates a for-profit subsidiary for each school’s solar project. This subsidiary holds the E-PPA, owns the solar system, and is eligible to take the federal tax incentives. SolSolution then connects with tax equity investors that purchase the tax equity generated by the solar project. These investors provide the bulk of the financing for the system. A smaller portion of the system is then financed through solar energy investors, who purchase “solar bonds” called Solar Energy Investment Notes (SEINs) issued by the for-profit subsidiary. The minimum SEIN investment is $100 and investors can choose between a three, five, or seven-year term, with longer-term notes providing a higher return on investment. The remaining cost of a project is usually financed through philanthropic donations from the community and supporting foundations.

Samantha noted that, while raising money is never as easy as they would hope, they do see many investors that are interested in the educational and community benefits a SolSolution project investment provides. This is particularly true when investors or donors are tied to the community or have a personal stake in the project. They are able to gain both a philanthropic benefit and a good return on their capital, which can be very appealing to many people.

Samantha says they use some of the income from their E-PPAs to fund the organization’s work, but also apply for grants to supplement their efforts. The majority of grants SolSolution has received have been used to bolster the development and implementation of their educational offerings for schools. They also recently supplemented their flagship Solar Ambassadors program with grant money, in order to provide additional materials and training to staff. 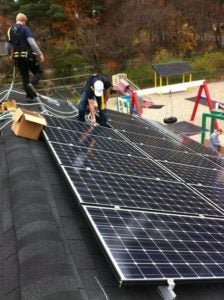 Samantha noted that, although New England may not appear to be a great region for solar due to its erratic weather, Massachusetts has some of the best policies and structures in place to make solar an attractive renewable energy option. These include tax rebates and credits, as well as a strong Solar Renewable Energy Credits (SREC) market. In addition, Massachusetts has high energy costs that make more efficient energy solutions more attractive for homeowners and businesses alike. With solar-specific initiatives coming from both the city of Boston and state as a whole, Massachusetts has one of the most exciting and largest markets for solar in the country, second only to California and tied with Hawaii.

Founded in 2007, SolSolution has just completed their first pilot project in Sudbury, MA and is now talking with over 30+ schools and school districts throughout Massachusetts. As they’ve worked with schools, Samantha said they frequently run into obstacles at two different points in the process of going solar: 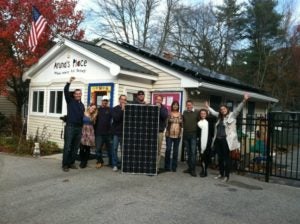 Although there are sometimes barriers that make the process of helping schools go solar more complicated, Samantha is also quick to point out that it’s always worth it for all parties in the end. She also said that, while they would love for the solar process to be as easy as a school saying, “I want my school to go solar!” and then have solar installed a few week later, she recognizes that schools are unfamiliar with many alternative energy options available today.

Because of this, Samantha says that an integral part of their job is building lasting relationships with school and community members, in order to demonstrate that they are not like a typical utility company that just produces electricity and sends them a bill each month. Instead, they emphasize SolSolution’s role as an educational resource for administration, staff, students, and the community as a whole.

Samantha says it is therefore particularly rewarding when board members, teachers, or students realize, “Hey, this could work really well for us.” Even if the process takes months or even years to finalize, they know at that moment that the schools will want to work with them to make solar happen. It then becomes SolSolution’s responsibility to make the process as smooth as possible. 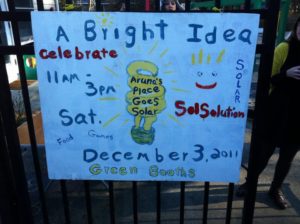 Samantha says they also often see teachers, students, and neighbors become very engaged in the process after they learn that a solar installation is coming to their school. This excitement and energy behind solar is part of what drives SolSolution’s work. It’s also where the greatest potential for impact lies because, more than just providing schools with green power, SolSolution is able to get people really excited about generating their own energy, protecting the environment, and supporting their local schools. They are also building a constituency of people that will be invested in generating community-based renewable energy in the future.

Check out some more photos of their first pilot school project, which is currently operational!