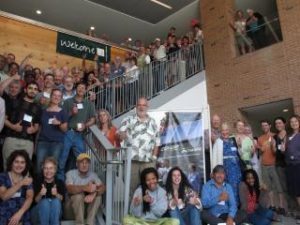 Co-op Power is a New England-based grassroots organization with the mission of being a “multi-racial, multi-class movement building a sustainable and just energy future.” It is an entirely consumer-owned entity that focuses on the concept of community. More than 455 members in New York and New England own the organization. Co-op Power is all about regional jobs, regional capital and regional renewable energy sources. According to its website, the group has “raised more than $320,000 in Member Equity, $1.3 million in member loans, and $850,000 in local investment to support the development of community-scale clean energy projects and to build Co-op Power.” For Co-op Power, however, the “how” of the operation is at least as important as the “what.”

Barn-raising for the 21st Century

One example of the organization’s innovative programs is called “Neighbor to Neighbor”. This program is a 21st century variation of “barn raising”. A number of years ago, Lynn Benander, President and CEO of Co-op Power, visited the Plymouth Area Renewable Energy Initiative (PAREI). Co-op Power then modeled its Neighbor to Neighbor program after a similar program at PAREI.

In former times, virtually every farmer required a barn, but barn-building was an expensive and labor-intensive proposition. So, farm families would join together, offering their labor, materials, and know-how for free to help their neighbor “raise” his barn. They did this very willingly, with the expectation that the favor would be returned when they themselves would need new barns raised or old barns repaired.

With the Neighbor to Neighbor program, if an individual (who doesn’t have to be a co-op member, but members receive greater benefits) wishes to install, say, a solar hot water system in her home, she can call for a local energy coach to set up a site visit with a professional installer. If the installer determines that such a system is viable, they will design the system and provide an estimate. Then the individual will assist three to five other people as a volunteer to help install their systems. When it comes time for her own system to be installed, those three to five people, in turn, help the individual as volunteers, under the installer’s guidance, to complete the job. This work is far from an onerous obligation, according to Lynn.

A Fuel Plant and Jobs

Lynn says that Co-op Power has created at least 200 jobs directly from its green job training programs. She also notes that the organization has created many more jobs indirectly, through a “ripple effect” upon the surrounding regional economies.

Lynn emphasized that there was nothing specific to the Northeast in what Co-op Power is achieving. Its business plan is fully replicable, and other organizations have already used it as a model. According to Lynn, structuring Co-op Power as a network of community energy cooperatives has helped Co-op Power gain economies of scale and ensures decision making is local. Focusing on including people from diverse communities has ensured there are people in each community energy cooperative who have great needs and great resources. The combination really makes things work. The single most important program that Co-op Power has to share with others is its Community-Shared Solar program, in which 200 to 400 members share a large solar electric system. “This is our most replicable service and provides the best economic value to people and communities,” said Lynn.

When asked what Co-op Power plans to do going forward, Lynn said that they plan to add 5 MW of community solar, increase biodiesel distribution, build out their energy efficiency program and overall help communities get fossil fuel free.

“Who owns it matters and we’re excited to be part of a network that’s building local ownership of our energy resources,” she said.