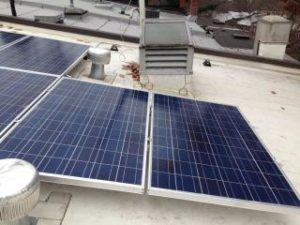 These words marked the first peer-to-peer transaction of the Brooklyn TransActive Grid. The seller – Eric, a 44-year resident of Park Slope – owns solar panels on his roof. The buyer is a neighbor, Bob Sauchelli, who does not own solar panels. Celebrated by a cheering audience, and recorded for posterity in this video, this financial exchange is an example of new ways consumers can interact with the electric grid and each other.

A Brooklyn-based boutique project-development firm, LO3 Energy, conceived this project, which is actually two projects: Brooklyn Microgrid and TransActive Grid. Brooklyn Microgrid is physical infrastructure that when it is complete, will allow a community to maintain some degree of power in the event of a shutdown of the larger grid. A microgrid is a small-scale electric grid that can operate autonomously from the larger electric grid. TransActive Grid is an internet-based market that allows for the trading of energy ‘tokens’, using blockchain technology.

The origin of blockchain technology is intimately connected to that of computers and the internet. According to John Lilic of ConsenSys (Consensus Systems), a venture production studio that supplies software for LO3 Energy’s projects, from the time that American businesses started to use computers in the 1950s, there was a need to organize the data produced. That was the function of the database, and in the 1960s and 1970s, there was a need to connect databases to talk to each other, resulting in the first computer networks. Applications were then created for these networks, resulting in the modern Internet. Databases and networks were kept separate, however, causing problems.

The blockchain solves these problems by making the network and the database “co-terminous”: that is, one and the same. Many computers, called nodes, all run the same database. All nodes are participating in the database; the nodes and the database become one. Every ten seconds or so, all the nodes achieve consensus. And every time consensus is reached, it creates a new block. A series of such blocks is called a blockchain. The database is shared by all users, without anyone controlling it. Users cannot go back in time to change anything. The blockchain is immutable.

For the purposes of the Brooklyn project, the blockchain would enable people to sell clean energy directly to their neighbors without the intervention of a third party.

Brooklyn Microgrid is a step forward in the level of sophistication for this kind of project. “Formerly, microgrids were constructed campus-style to serve a local entity, for example, a hospital,” Lilic said. “A hospital can create a microgrid to produce its own energy when the grid goes down.” Brooklyn Microgrid wants to build a microgrid that would also protect people against the grid going down, but on a much bigger scale.

LO3 Energy chose two neighborhoods for this pilot project: Park Slope and Gowanus. It selected these neighborhoods because they were both threatened by weather events, such as Superstorm Sandy, and they are both richly diverse, in people, incomes, and building stock.

“We wanted to know which groups would be most interested in the project, and which would be best served by it, and those neighborhoods were what came up,” said Scott Kessler, Head of Operations at LO3 Energy.

The TransActive Grid is what allows neighbors to sell solar energy as described above. Its software uses the blockchain to sell digital assets that represent the solar system owners’ generative capacity.

“Everyone has a smart meter,” Lilic said. “If you have a surplus of solar power, we can take that data from the smart meter and produce tokens that represent the surplus and put them on the open market. Neighbors – or anyone around the world, actually – can buy those tokens.”

Kessler said the people in Park Slope who owned solar arrays were enthusiastic about the project. All of them had had their systems for quite a while, and all expressed a desire to reduce their carbon footprint, but wanted their neighbors to buy their excess energy. Being part of a community project was very appealing to them. The tokens they would generate would allow them to sell green energy. This differs from the common use of renewable energy credits (RECs).

“RECs are an incentive for project developers to take risks,” Lilic said. “For one megawatt of energy, you are issued a certificate. The problem there is that third-party retailers sell them to consumers as ‘green energy’, but what consumers actually purchase is an attribute of the green energy. It’s a fantastic program, but a lot of consumers don’t understand what they’re buying on the retail level: they’re actually still using ‘brown’ power in their air conditioners, and thus may over-consume it, thinking it’s green.”

So, TransActive Grid tokens localize the environmental benefit of green energy. “If a neighbor is producing excess energy,” said Lilic, “it is likely to be going to his neighbor’s refrigerator. So if you purchase tokens, you are also probably receiving some electrons as well from the neighbor: the third-party retailer is shut out completely. Furthermore, the seller would probably spend the money in the community, so there’s an economic benefit as well.”

In order to make the TransActive Grid viable, it needs to scale up. “We are in the process of recruiting more prosumers,” said Kessler, referring to consumers who also produce their own power. “We are also contacting local merchants to get them to buy local power, as well as talking to residents to make them part of the program.”

LO3 Energy is also working with the local utility to make the physical Brooklyn Microgrid operational.

“To make it real, to scale it up, you need the cooperation of the utility,” Lilic said. “I don’t believe the utilities will ever go away. Consumer power production could result in more and more opportunities for the utilities. The prosumer sells power to his neighbor, so the utility could earn a fee or wheeling charge. This is one example of possible new business models, as more consumers become prosumers.”

The TransActive Grid and Brooklyn Microgrid projects are not happening in a vacuum. New York State is developing a comprehensive energy strategy called Reforming the Energy Vision (REV). The goal of REV is to determine the policy framework that will allow for distributed energy technologies like microgrids to develop.

“I think REV is one of the reasons we chose New York as our demonstration site,” said Kessler. “We would probably have done it here, anyway, but thanks to REV, it was an evolutionary process, rather than a disruptive one. It allowed us to work with regulators and utilities that are enthusiastic about the potential of the project. There is also a disruptive model of working, where we might have, for example, gone into another state, where what we are doing would cause an issue for the utilities, but that didn’t happen in New York because of REV.”

In the transaction between the Brooklyn neighbors, Eric got paid at the retail rate. Had he sold it to his utility, he would have received a lower, wholesale rate.

“Community-scale microgrids are very interesting because they allow people to have a more energy-independent system,” Lilic said. “Transporting power over long distances greatly increases cost, so localizing makes it cheaper. Localizing the economic and environmental benefits of energy production and consumption is a huge, huge gain for all of us.”