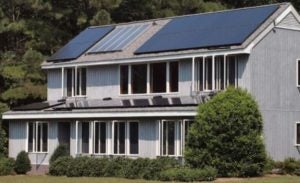 Tom Crockett and his wife Susan have had a life-long interest in using energy more intelligently. Their home demonstrates this as it employs three different types of solar: passive solar, solar hot water, and a PV system. The Crocketts designed the home in the 1980s with the help of an architect to maximize its solar capacity. The PV system is the most recent of the additions, added in 2010. The 39-panel system is rated at 6.9 kW.

The Crockett’s PV system produces as much electricity as their home uses. “As a computer scientist by profession, I’m all about data!” Tom said. He has compiled an Excel spreadsheet with detailed month-by-month stats for his system since it was installed.

Tom’s enthusiasm about his system has spread. Tom connected with the Hampton Roads Solar Group when a co-worker was in search of volunteers to manage attendees. Susan thought it would be good to do a similar tour in their neck of the woods. In 2012, she organized the area’s first solar tour of homes and businesses in Gloucester, Mathews, and Middlesex Counties.

“She’s been organizing that every year since, and we’ve featured our home each time,” Tom said. “It makes for a very busy day of non-stop talking and explaining, but the folks who turn out are always interested and engaged.”

Tom and Susan have expanded their outreach efforts. They’re now helping neighbors go solar through the Middle Peninsula Solar Co-op. Tom encourages folks to sign up because the group will help members save money as well as provide them the ability to work with dependable installers and quality components.