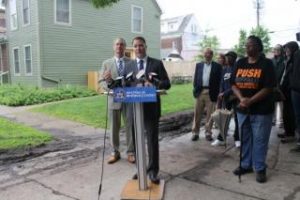 In early July, two bills passed the New York State legislature to provide tax incentives to geothermal heat pump (GHP) installations. These incentives are designed to put GHP installations on equal tax footing with other renewable resources. GHP systems store water in underground pipes to provide buildings with heating in winter and cooling in the summer. The first bill grants a tax credit of 25 percent to owners of residential GHP systems, with a cap of $5,000. This is equivalent to the tax credit for solar PV in New York. The second bill provides a state sales tax exemption for both residential and commercial GHP installations. Both bills passed the State Senate on Earth Day (April 22), and both of them passed the State Senate and the State Assembly unanimously.

NY-GEO, an industry trade group, worked to pass both bills. Bill Nowak, the Executive Director of the organization, describes how it was able to secure passage of the bills. “We worked closely with the bills’ sponsors – Assemblymember Sean Ryan and Senator Robert Ortt for the tax credit and Assemblymember Ellen Jaffe and Senator Ortt for the sales tax exemption bill – to craft good bills and to bring them to the attention of the legislators. We didn’t find a problem getting access to legislators and we think the good reputations and skill of our sponsors and the new leadership in both houses made it surprisingly easy to pass these bills.” When asked about the total lack of opposition, Nowak remarked: “‘Unanimous’ is always a pleasant gift to receive.”

For Nowak, success was particularly gratifying because of the frequent confusion in many people’s minds between GHP and the use of geothermal as electricity generation. “We’re a relatively new industry with low visibility, and geothermal electricity generation has done a better job of capturing the public’s attention to date. It makes it hard when you’re introducing an incredible technology and you not only have to explain what it is, but also what it is not.”

Nowak was asked about GHP technology’s role in reducing greenhouse gas emissions in the state, now that the bills have passed. “We believe that parity with solar will result in strong growth for GHP installations with a concomitant environmental and economic benefit for New Yorkers. According to the recently adopted New York State energy plan, on-site combustion (largely for heating buildings) is responsible for 35 percent of fossil fuel greenhouse gas emissions in New York State. In-state electricity generation is responsible for only 18 percent. We strongly support cleaning up electricity generation in New York, but stress that renewable thermal is the next wave in resisting climate change.” He believes that GHP has not been accorded the same degree of importance as solar and wind. He notes New York is uniquely suited to GHP technology. “In many states, dirty electrical generation makes wind and solar generation the most productive low-hanging fruit in cleaning up energy supply. New York’s electrical supply, which includes large amounts of hydro and nuclear (which of course presents its own problems), is low carbon… which makes renewable thermal relatively more important here than elsewhere.”

He strongly believes in the power of GHP as a job creator. “If conventional heating systems are replaced on average every 20 years, that means five percent of building and home heating systems need replacement each year. Once renewable thermal is established as the way to go, it will have an incredible impact on employment. The excavation, drilling and installation jobs cannot be exported, and almost all of the manufacturing jobs are currently based in the U.S. GHP can be a serious wealth creator and climate savior.”

Nowak is enthusiastic about the potential for synergy between GHP and other renewables. “Starting now, new buildings should be zero net energy propositions. Denmark – which outlawed fossil fuel heating in new buildings in 2013 – has already charted the path humankind must take… The best way to get to zero net energy in most cases is conservation and efficiency, coupled with renewable electricity (mainly wind and solar) and geothermal heating and cooling. Couple those with a renewably-powered electric car, and we’ve got a template for a sustainable future.”