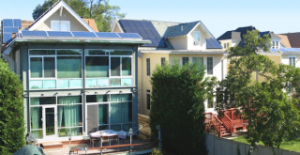 Last month, the National Renewable Energy Laboratory released a new study demonstrating that rooftop solar could account for as much as 40% of America’s energy use. The report combined geospatial analysis and estimated solar potential to arrive at this figure. This should serve as a call to action. Rooftop solar can be a major part of our energy system. But, for that to happen we need improved policies that ensure everyone has the ability to invest in their own solar.

The economics of solar are rapidly improving. The price to install solar has dropped significantly and should continue to do so. At the same time, the price of utility-supplied energy continues to rise. This is providing an opportunity for homeowners to take charge of their electricity and make a financial return while doing so.

NREL’s study counters claims by other studies, most notably one by the Massachusetts Institute of Technology, which argue utility scale solar is much more economically efficient. These analyses ignore several key factors that advantage distributed solar over utility scale solar. Distributed solar integrates more easily with the electric grid. It doesn’t require significant investment in long-distance transmission lines and the siting issues that accompany it.

This is where market potential comes in. Americans are overwhelmingly supportive of solar energy and want to use more. Policy roadblocks thrown up at the behest of politically connected solar opponents are holding us back. Utilities have been able to foist unfair fees on solar customers as a way to discourage further solar adoption. Distributed solar is creating a community of supporters to push back against these challenges and fighting for a fairer electricity system that will allow solar to reach its potential.