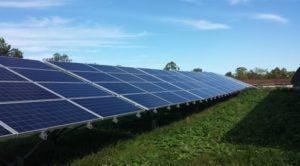 The sun shines everywhere in Maryland. But too few Marylanders could take advantage of solar energy before the advent of a statewide community solar three-year pilot program of approximately 196 MW. Community, or shared, solar makes it possible for anyone with an electric bill to access solar energy, even if they can’t put it where they live. Shared solar means photovoltaic (PV) systems can be somewhere else in the community (in a field, on a building, over a parking lot, and elsewhere) but provide the benefits of solar electricity to participating subscribers. Community solar also represents a significant opportunity to expand direct access to Maryland’s renewable energy economy to everyone in the state. A successful pilot program that delivers energy savings to a wide variety of participants and builds a diverse portfolio of shared renewable projects will broaden and deepen the state’s constituency for renewable, clean, distributed energy. It will also make the case for a permanent and expanded program.

Now that the program is officially launched across much of the state, Solar United Neighbors decided to take a closer look at community solar in Maryland to date. In our recently released report that is the first of its kind about the Maryland program, we cover its history and structure, highlight some projects happening across the state, and investigate some of the program’s successes and challenges so far. The report is meant to establish a baseline for future analysis of Maryland’s community solar program. We will be revisiting the program to track its progress in future reports, so that a future, permanent program can build on the pilot’s successes and learn from any mistakes made.

This post captures some of the report’s highlights and key takeaways from the status of Maryland’s community solar program.

With a specific provision in the legislation to “encourage developers to promote participation by renters and low-income and moderate-income retail electric customers,” the legislature made its intent clear. The regulations attempt to comply with this intent by allocating 30% of the program’s system size allocations (~196 MW over three years) to projects that provide at least 30% of the kilowatt hour output to low-and-moderate income (LMI) subscribers. In effect, the program has created a scarce and desirable resource (space in the program) and then sections off part of that resource for LMI projects. So far, the LMI category is unfilled in Pepco territory, but, in other territories covered by BG&E, Delmarva, and Potomac Edison, LMI project capacity is completely allocated for the first year. This is very encouraging. What remains to be seen is whether these LMI-focused projects will be able to find financing, find customers, and deliver meaningful savings to low-to-moderate income subscribers.

Support for non-traditional and community-owned projects

Community solar is often assumed to mean large-scale, multi-megawatt installations with shares divided among a large number of people. The concept however, also has the potential for smaller-scale and community-focused projects to flourish if the program allows them the space to do so. These smaller projects, while not as cost effective on a per-watt basis as a larger installation, hold the potential for community members to take a more active role in project development and management. They can also allow for communities to retain more of the economic value it produces. The Maryland program regulations include several provisions to support these types of projects.

Maryland’s recently launched pilot program is on the cusp of making solar accessible to almost everyone in the state. Over the next few years, we will learn much more about how successful the program will be in making renewable energy accessible to a diverse cross-section of Marylanders across the state. A permanent program, building on the pilot’s successes and learning from its mistakes, will need to grow beyond the pilot program’s size constraints currently restricting expansion. But if successful, the permanent program could play a central role in speeding Maryland toward a renewable energy economy that’s accessible to and benefits all residents.