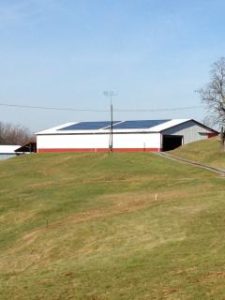 Many government programs exist to meet vital needs. And although they may be popular with the target group for which they were designed, they are little known to the general public. This means that at least some organizations that could take advantage of these programs may not do so.

Collins began by describing the basic operations of the funds. Each fiscal year, every state receives two kinds of allocations of grant funds: one for projects of all sizes, and a smaller allocation for projects requesting no more than $20,000. A formula is used to allocate funds to states that considers, among several factors, rural population. Those funds that are not used by states are returned (or “pooled”) to the general allotment. Then, all projects that are not funded by state allocations compete for these remaining funds.

Collins said the 2014 Farm Bill provided $50 million per year in mandatory funding for the fiscal years 2014 through 2018. Congress can add or reduce discretionary funds in any budget year.

“Discretionary funds,” he added, “generally need to be obligated in the fiscal year in which they were appropriated, or they return to the Treasury. We may find out this year, as USDA has funds reserved for REAP loan guarantees that may not be fully utilized; they may carry them into next year if they’re able to, or they may use them to fund additional grant projects.” The only year that Collins could recall in which REAP funds were not fully spent was 2012, when Congress required the USDA to use only $22 million of the $70 million in mandatory funds allocated in the 2008 Farm Bill. The remaining $48 million were carried over to the following year.

Collins pointed out that a new rule implemented in 2014 simplified the application process.

“There are now three tiers of complexity. Projects with total costs under $80,000 follow a relatively simple application process, helped considerably by templates… available on the USDA RD [Rural Development] website. Projects with total costs between $80,000 and $200,000 are fairly manageable. Projects with higher total costs follow a more stringent application process, including a third-party independent feasibility study, financial statements and pro formas and, in some cases, [an] engineering review of the application’s technical report.” However, he warns that the law requires all applicants to register in the Federal System for Award Management (SAM), a process that often creates confusion and frustration, particularly for those not accustomed to obscure government language.

We pointed out that there still exist those who could benefit from REAP, but do not seem to know of the program. He answered that USDA Rural Development has been asking states to market it more forcefully, particularly to historically underserved communities.

“USDA RD has developed outreach materials for use by states focusing on this target market. We are also asked to market to lenders the underutilized loan guarantee component. New York has not been especially aggressive in marketing the grant program, because we receive far more funding requests than we have funds available every year.”

One organization that received REAP funding is the Noble’s Cooperative Electric of Worthington, MN. In 2003, it received a $500,000 grant from REAP to create a utility-scale wind farm. The cost of the wind farm was $3.2 million, so the grant from REAP was equivalent to about 15.5 percent of total expenses. The general manager of the cooperative has said, “This construction allowed us to get into the wind business; to produce our own power to serve our members. That was important.”

The Rural Electric Convenience Cooperative (REEC) of Farmersville, IL, is another example of a REAP funds recipient. That organization received a $375,000 grant from the REAP program for a 900 KW wind turbine in 2006. It was constructed over a 60-foot pile of coal tailings from a defunct mine. The wind turbine, which began operations in 2009, serves 300 members and is the second oldest one built by a cooperative in the state. So satisfied are the owners with the program that they are considering building two more REAP-funded turbines on the same site.

So for nonprofits, which are ineligible for the tax breaks that for-profit entities can (at least for the time being) obtain when they adopt solar, REAP would seem to be the ideal program. However, as with anything else, it is a matter of each nonprofit doing the research necessary to determine whether the program is right for them. If it is, the organization should take into account the characteristics of its particular state’s program. Finally, the nonprofit must then figure out to which of the three application “tiers” it would be appropriate to apply, and how best to navigate the application process.