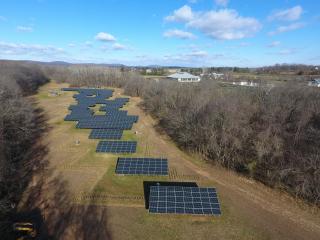 Solar is universally popular. Poll after poll shows respondents want more of it. Despite the general positive public sentiment toward solar, siting it in communities can still prove to be a challenge.

This opposition can come in many forms. Community members may be concerned about the visual impact a large array may have on in their rural community. Along with visual disruptions, there are concerns about what the installation of solar will mean for local wildlife. Add to this concerns about loss in property tax revenue when land is turned from farmland to solar, and support for solar can drop precipitously.

Compounding these problems is that the growth of solar has in some places led to a gold rush mentality. Developers are scouring the countryside for landowners who would be interested to host a solar array. This has created a false perception in some communities that their entire area could be draped with panels. This is not technically feasible, as local transmission capacity is limited in its ability to accommodate that amount of generated electricity.

Furthermore, farmers in “hot” areas for solar often feel un-prepared and overwhelmed by the offers they are receiving. Agricultural land preservations fear that the rural character of a place may be at risk. Sometimes these concerns lead to highly restrictive land ordinances that threaten to stop solar in rural areas altogether.

Solar developers are starting to realize they need to be taking steps to ameliorate these concerns.

One way to lessen the visual and natural impact of these types of installations is to plant native grasses around the systems. This can also improve the ability of the area around the system to handle water from storms.

“From the industry standpoint it makes sense,” said Gavin Meinschein of SoCore Engineering. I can’t figure out why more of the industry isn’t going this route.”

Meinschein did note these improvements do come with cost premiums. The natural additions to solar fields can add a few hundred dollars, to a few thousand dollars, of cost per acre depending upon the particular type of plants used. These costs come from both the set up cost as well as additional maintenance, i.e. mowing that needs to be done for the first several years after the systems have been put into place. These maintenance costs stop after a few years when the grasses reach their natural height.

Other developers have found a way to offset maintenance costs by having livestock graze on the land. In addition to making up for maintenance costs, as the livestock owner pays the developer grazing fees, this practice preserves the agricultural nature of the land and surrounding community.

Aside from the physical modifications and wildlife accommodations that can be made to solar projects, it is also important to develop solar in a way that the community members themselves can actually benefit financially from the electricity that is generate.

This is a key benefit of solar energy. It can be built in a way where community members can own their own share of energy production and see returns on their electric bill. This changes the perception of solar from just another energy source and potential harm to the community to something that allows people to take control of where their electricity comes from.