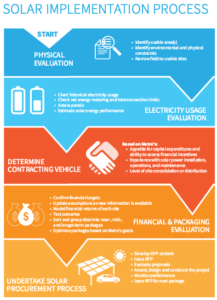 The Washington Metro Area Transit Authority (WMATA) has a goal of sourcing 30% of its electricity use from renewable sources within the next decade. In pursuit of this goal, it recently published a report examining its ability to install solar on WMATA-owned property. The report looks at how implementing solar would help the agency meet its goals, the kind of solar it should install, where to install this capacity, and a decision of the process to get it installed.

WMATA owns nearly 300 sites in the D.C. region. Of those, the report found 138 which would be suitable for some type of solar installation. Further, the report found that implementing solar could save metro more than $3 million over the next twenty years.

Last fall, the agency issued a request for proposal for the construction of solar on nine sites, eight parking lots and one field, it owns. The proposal says the sites have up to 12 megawatts of solar capacity available. The agency is seeking a 20-year power purchase agreement (PPA).

WMATA has opted for a PPA because developing and financing these solar projects for an agency like Metro is different than a home solar project, or one completed by a business. WMATA is ineligible to take the 30% federal solar tax credit because it does not have any tax liability. As such, the agency plans on either procuring the power through a Power Purchase Agreement or leasing the land to a developer. It will do this so another entity, that does have a tax appetite can take the tax credit.

In total, Metro’s report found that if it were to fully make use of solar on its available property, it could provide ¼ of the agency’s electricity needs. This RFP is a start on achieving that mark.