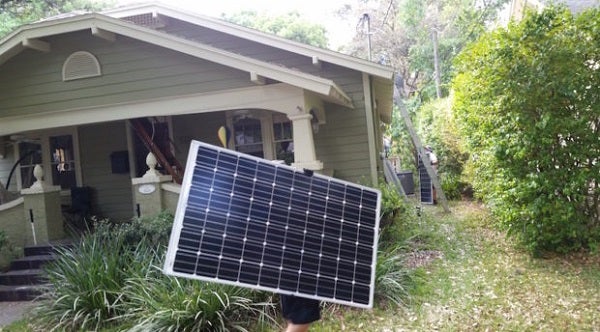 Solar energy not only helps homeowners save money on their electric bills, it also creates jobs. New data show just how many jobs that could be in Florida. A report from the National Renewable Energy Laboratory (NREL) found that Florida could produce 46 percent of its electricity needs by installing 76,000 megawatts (MW) of rooftop solar capacity. Installing that much rooftop solar in Florida would yield about 135,000 jobs for ten years.

The NREL figure represents Florida’s technical potential for solar. Technical potential refers to what is physically possible, tempered by common sense—e.g., no panels where they would be shaded for much of the day. NREL calculated the amount of solar that could be produced on unshaded roof planes that are either nearly flat, or that face east, southeast, south, southwest, or west. If any such roof plane could accommodate at least 1.5 kilowatts of solar panels, NREL modeled solar on that roof plane. Adding these areas together yielded a technical potential of 76,000 MW of rooftop solar in Florida.

The technical potential is just a theoretical concept. Yet the economic potential–that is, the rooftop solar installations that would save building owners money–may not be far behind. This will be especially true over the next decade, as solar costs keep falling due to technology improvements and economies of scale. In the coming years, solar’s economic potential will keep rising.

Florida’s estimated job potential from rooftop solar is based on the Solar Foundation’s count of 260,077 U.S. solar workers in 2016, and the Solar Energy Industries Association’s reported 2016 U.S. solar installations of 14,626 megawatts. Dividing the two yields almost 18 workers per megawatt of solar installed.

Finally, spacing out the installation of NREL’s 76,000 megawatts of Florida rooftop solar over ten years would mean 7,600 megawatts of rooftop solar installed annually. Multiply that times about 18 workers per megawatt and you get 135,000 jobs—for a ten-year period. Jobs from utility-scale and community-scale solar would be additional.

For rooftop installations, the number of jobs per megawatt installed would arguably be higher than the U.S. average in 2016. This is because rooftop jobs are smaller and more labor-intensive than utility-scale solar projects, which were included in the average. On the other hand, with a big increase in the size of the rooftop solar industry, economies of scale should also come into play. On balance, a potential 135,000 rooftop solar jobs in Florida for ten years is a reasonable ballpark estimate.

Will Driscoll is a writer and analyst. He previously conducted environmental analyses for EPA, as a project manager for ICF Consulting. He earned a master’s degree in economics and policy from Princeton.