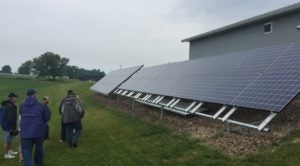 Electric utilities can meet these targets in one of two ways: procuring renewable energy themselves or by purchasing renewable energy credits (RECs) from others. If the utility does not meet the target, it must pay alternative compliance payment (ACP).

Ohio created a state-level RPS, known as the Alternative Energy Portfolio Standard (AEPS), in 2008. The standard set a goal of obtaining 12.5% of the state’s energy from a variety of renewable sources by 2024. Included was a ‘carve-out’ for solar for .5%. While these standards were modest, they were powerful incentives for increasing renewable energy. The law helped create roughly 25,000 Ohio jobs.

In 2014, the legislature put a two-year freeze on the law, essentially delaying the AEPS standards for two years. This has put Ohio at disadvantage relative to its neighbors and has made it more difficult for Ohioans to go solar.

Under the AEPS, solar systems didn’t just produce electricity. They also produced RECs. Solar owners could sell these RECs to Ohio utilities so those utilities could meet the AEPS and avoid having to make compliance payments. The additional revenue solar owners generate from selling RECs helps them more quickly pay off the cost of the system.

The legislature is considering extending the freeze. Instead the legislature should allow the freeze to expire, and standards to return. Allowing the AEPS to return is good for solar and Ohio’s economy.