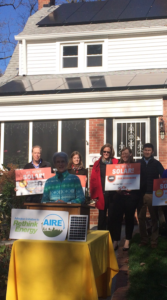 Community-powered solar has hit a terrific milestone. FL SUN, in partnership with co-ops in Washington, D.C., Maryland, Virginia, West Virginia, and Ohio, has helped install a total of 10,000 kilowatts of solar. These state-based co-ops are under the umbrella of Community Power Network, an organization for people who want to take control of where their electricity comes from. These state-based solar co-op programs have helped more than 1,500 homeowners go solar.

“Nine years ago, my then 12-year-old son asked if we could install solar panels on our home,” said Anya Schoolman, Community Power Network’s Founder and Executive Director. “I had no idea at the time that eventually we’d be helping people across the country go solar. Our success is a testament to solar’s popularity and the desire of people to take control where their electricity comes from.”