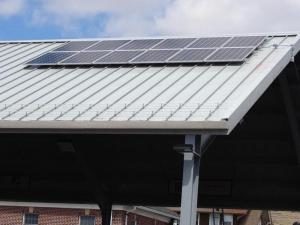 Solar panels on roof of Morgantown Farmers MarketIn March, 2013, the Mountain Institute spearheaded a successful project to install twelve 260 Watt solar panels on the Morgantown Farmers Market Pavilion roof. The 3.12 kW system is net metered and supplies approximately 40-50% of the structure’s electricity needs. It also offers a place for electric vehicle owners to plug in their cars.

The system produces $300 to $400 per year in electric bill savings. Although the annual savings are fairly modest, the project is located in a highly visible location and serves as a very tangible demonstration of the fact that solar power is real and that it works.

The Mountain Institute (TMI) sees this project as a first step to developing more projects that benefit the community and help expand solar in the state. But, as with most pioneering projects, developing the solar project ended up being more complicated than initially anticipated.

Morgantown, with a population of 30,000, is the fourth largest city in West Virginia. It is home to West Virginia University (WVU), which is a major economic and population driver of the City. Morgantown tends to be more diverse and politically progressive than other areas of West Virginia yet still possesses a friendly and laid back vibe typical of the State.

TMI’s motivation for choosing Morgantown was based on the fact that (1) their office (and project consulting team) was located in the City, (2) the city’s more progressive nature would be helpful in starting a project from scratch, and (3) WVU’s presence provided high visibility for the project.

In West Virginia, solar is a vastly underutilized resource. Although the state’s solar resources are equivalent to those in many Midwestern states, the West Virginia ranks 49th in direct solar employment. To put this in perspective, the neighboring state of Pennsylvania is currently ranked 8th in the U.S. in developed solar capacity despite having less solar resources than West Virginia.

TMI initially set out to develop a community investment model in which people could invest in a solar installation and a make a return on investment. They knew that this would be a challenge, since West Virginia does not allow PPA’s or virtual net metering, has minimal state tax incentives supporting renewables, and has low electricity prices. TMI therefore attempted to put together an entrepreneurial model that would take advantage of federal tax credits and a robust 62.5% WV state tax designed for ‘alternative vehicle fueling infrastructure’.

With this structure in hand they set out to secure a site and identified the Morgantown Farmers Market Pavilion as a good host. The building possessed a roof specifically designed for solar and it was located in a highly visible location that would help demonstrate the efficacy of solar technology to the public.

TMI initially presented the Morgantown Parking Authority (MPA) with information on their model that would monetize both the federal and state tax credits to make the project more cost-effective. Although the model demonstrated ROI horizons and promised cheaper energy to the site hosts, its complexity proved to be a stumbling point for many folks that weren’t familiar with solar energy in the context of finance and tax credit structure. In addition, during the project development cycle, the WV tax credits they had factored into their model were no longer applicable because the state government did not implement tax incentives for renewable projects that were legislated by the state legislature. Without these credits, the ROI horizons for the project were over 25 years.

As a result TMI was forced to go back to the drawing board and instead proceed with a donation model that would accomplish their goal of placing solar in a highly visible location. Because of these roadblocks, rather than putting up $20,000 in Clean Water Act settlement money as an investment in a larger system, the team instead opted to install a small 3.12 kW system that they could cover the cost of directly with their settlement amount. In the future TMI plans to do further community outreach and engagement in order to fundraise to expand the system size in phase II. 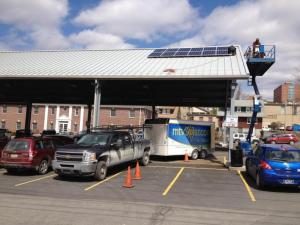 Throughout the project, The Mountain Institute identified a number of lessons learned that may be helpful for others trying to develop solar projects in less solar-friendly markets:

Although TMI’s project is relatively small compared with systems in other states, their work to pioneer solar in a public, highly visible location has caught the eye of Morgantown residents. The organization plans to develop more solar projects in a wide variety of locales in order to build a critical mass of solar supports that they can leverage to pass more favorable solar policies.