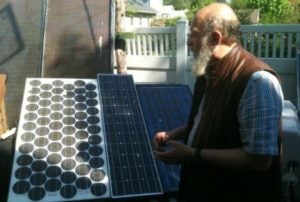 Solar technology has been around for a long time, but the modern solar industry as we would recognize it began in the 1970s. It came about in large part due to the OPEC oil embargo. Suddenly, high energy prices encouraged Americans to think about where their energy was coming from and better ways to produce it.

“When I began Jimmy Carter was president,” said Watt Bradshaw of Blue Ridge Energy Company. “Solar was (almost) a novelty to most people. We were spiritually committed. You had to be in a new, emerging technology that was starting out with essentially 0% market penetration. Nobody had it. Some of us referred to ourselves as “solar cowboys”, the new guys doing things that had not been done before.”

A notable difference Bradshaw cited between the solar industry of a few decades ago and today’s industry was the dominance of solar thermal over solar PV. This has to do with pricing.

At the time, a solar thermal system could be installed for about a dollar per watt. Solar PV costs were as much as ten times that amount. The relatively high cost of solar PV meant that these systems typically were installed only in off-grid situations. He noted that the small businesses that started the industry had to provide a range of services to survive financially.

Scott Sklar came into the solar industry from the advocacy and policy world. He too joined the sector as a result of the 1970s energy crisis. He said this crisis was helpful in bringing together previously disparate solar advocates. This also led to evolving improvements in solar technology as more people and companies saw new market opportunities.

“The industry has evolved from custom systems to pre-packaged systems,” Sklar said. This evolution is being driven by technology improvements that allow for faster installation, higher performance, and reliability. Sklar also noted the availability of financing, which has helped to make solar more affordable, overcoming one of the industry’s biggest barriers. These improvements continue through today.

“What excites me about the future is still the vision that I had 40 years ago,” Bradshaw said. “At some time in the near future, we wouldn’t be building any more houses without solar than we did without plumbing, electric, or insulation.”