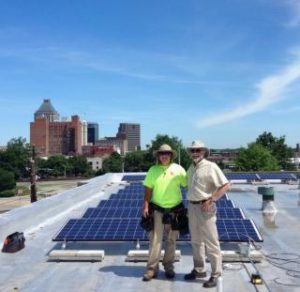 North Carolina nonprofit, NC WARN (North Carolina Waste Awareness and Reduction Network), works to transition the state to clean energy and energy efficiency. The organization recently performed a kind deed for another nonprofit… which has gotten it in legal hot water. NC WARN purchased and installed a 5.2 kW solar array on the roof of the predominantly African-American Faith Community Church in Greensboro last June. Installed as part of NC WARN’s Solar Freedom Project, the installation helped cut the church’s energy costs in half, to 5 cents a kilowatt.

In most states, such an action would be completely unremarkable. But North Carolina is one of only five states (the others are Florida, Kentucky and Oklahoma, West Virginia) in which so-called “third-party” sales of solar are banned. The concept behind the anti-third-party law is that an entity providing solar power to another entity is operating as a de facto utility, but is not regulated as such, and therefore represents unfair competition to the official utilities. In North Carolina, the state’s utilities are the only entities legally authorized to install rooftop solar systems. NC WARN was perfectly aware of this fact, but maintains that its actions were completely lawful. Duke Energy, the utility that provides power to the service area containing both NC WARN and Faith Community Church, nevertheless agreed to connect the church to its grid.

NC WARN then made a legal filing, seeking a declaratory ruling by the North Carolina Utilities Commission (NCUC), arguing that such third-party sales are not prohibited by state law. In late October, Duke, claiming that NC WARN was demonstrating a “blatant disregard” for the law, responded by urging the commission to fine the nonprofit $1,000 per day for every day that its system has provided the church with solar power, which, for the four-month period, would total about $120,000. This case is still pending. The fight over this installation has become a major national test case in the controversy over the issue of who has and does not have the legal right to install solar, and under what circumstances.

Two similar cases happened across the boarder in Virginia. Solar development company Secure Futures LLC made a deal with Washington and Lee University to install a solar system there. After the utility Dominion Virginia Power sent two cease-and-desist letters to Secure Futures, the company decided to take the case to the state supreme court. The same company also installed solar panels on the First Congregational Christian United Church of Christ, via its subsidiary, FaithWorks Solar, LLC. Secure Futures purchased, owns and operates the system and is paid a fee by the church.

Dominion resolved these disputes out of court by agreeing to legislation that set up a 50 MW solar pilot program in Dominion’s service territory and by supporting legislation that allows companies to legally offer power purchase agreements (PPAs), but only to nonprofits. Secure Futures is now bringing solar power to six schools in the Albemarle school district.

NC WARN asserts that it is not breaking the law. Rather, it claims Duke Energy’s attempts to stop third-party solar sales are against the law. It argues that Duke is in violation of the North Carolina constitution’s ban on monopolies. NC WARN also argued that providing the church with solar power is consistent with state energy policy, and that therefore Duke’s attempt to stop it from doing so is inconsistent with that policy. The organization further says that the single action of providing low-cost energy to an allied nonprofit – by claiming that the sale was “behind the meter,” because power is provided to the church alone and not the public – does not make it a de facto utility. The nonprofit has also made it clear that in no way were its actions motivated by a desire for profit, pointing out that the organization has received only “a few hundred bucks” for the energy it has so far sold to the church.

This isn’t the first time NC WARN has come into conflict with Duke Energy. The utility, like many other utilities, claims rooftop solar is unfair to the economically disadvantaged. NC WARN responded in a fact sheet that distributed solar power does not raise the rates of other ratepayers… but does take away from a utility’s profits.

According to NC WARN, Duke keeps raising its fixed “basic service charge” – a fee that everyone, including those who have rooftop solar power and are connected to the grid, have to pay – in order to finance the building of new power plants. Therefore, rooftop solar owners are not getting away with anything.

The Rev. Nelson Johnson, pastor of Faith Community Church (who, according to this article, “is known across the state for decades of work on social and economic justice issues”) is also unimpressed by Duke Energy’s position. Rev. Johnson wrote a letter last April to Lynn Good, president and Chief Executive Officer of the utility. The letter refutes the company’s claim that “solar hurts the poor” and urges it to stop lobbying against the Energy Freedom Act (House Bill 245), a bill the church and NC WARN both strongly support. The legislation would legally permit third-party sales of solar in North Carolina. Several other faith-based groups have also publicly supported the Solar Freedom initiative.

NC WARN says a victory in this case would be a “win” for all nonprofits. Rita Leadem, assistant director of the organization, said that she “believes that winning the Solar Freedom test case would allow other nonprofits to establish similar financing situations to support a church or other entity that may not have the ability to pay for a system up-front to benefit from solar power. Many churches see renewable energy as a great way to demonstrate creation care and do their part to reduce our reliance on dirty energy, in order to help slow climate change, improve human and environmental health, and educate others about the benefits of solar power.”

Leadem urged political activism among those who are fighting hostile utilities over the issue of distributed solar energy. “Contact your elected officials, talk to family, friends and co-workers about the benefits of solar for our society and the climate, encourage those who can afford it to install rooftop solar, fundraise on behalf of those individuals or organizations who can’t afford solar on their own, and work with like-minded individuals and groups to advocate for creative clean energy solutions.”

To learn more about the relationship of solar and low-income communities please click here for the NAACP and its Climate Justice Initiative’s refutation of the argument that solar power is unfair to the poor.