Many people are interested in coupling battery storage with their solar system. Our recent Three Rivers Solar Co-op in Virginia’s middle peninsula and northern neck helped 11 neighbors go solar—and nearly half of the group decided to install battery storage as well. The group selected an installer located in rural coastal Virginia with substantial experience in battery backup and off-grid systems, a perfect fit for participants interested in using solar power even when the grid is down.

We spoke to John Hedlund, a co-op participant who also hosted the group’s selection committee, the self-selected group of participants that review installer bids to choose the best one for the group. John was one of the five group members who decided to add battery storage to their solar systems installed through the group. 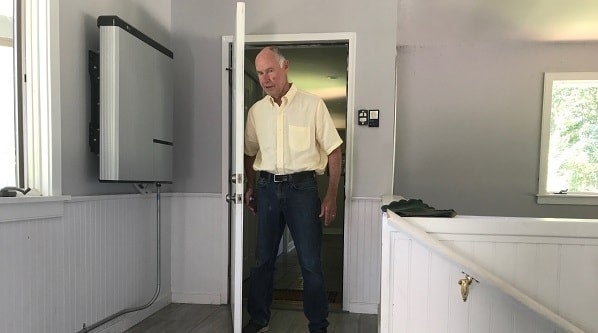 John Hedlund in his Virginia home 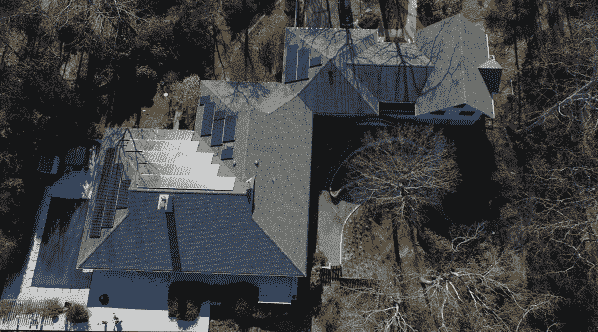 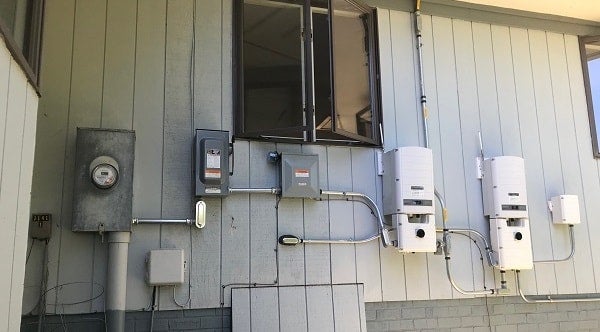 It’s a hybrid (25 kW) system consisting of 84 panels that produce a maximum of 155 kWh of power/day installed. Since the system was connected to the grid on March 22, we have generated 12 Mwh of energy. The battery is rated at 9.3 kWh. There are two inverters, one for providing AC power during normal operation, and the other providing AC power during grid outages. The system includes grid surge protection. **Editors note a ‘hybrid system’ operates like a normal ‘grid-tied’ solar system when the grid is functioning. During a grid outage, batteries (charged by solar) provide the power for the location. **

The battery is installed in the garage and all other components on the outside wall.

Why did you decide to add battery storage to your solar system?

We live in a coastal area that occasionally suffers power outages from storms — many of our neighbors have power backups. I chose a battery backup option because, in an extended outage, it would not run out of fuel (the sun).

How did you determine the size of your battery system, and what factors influenced your decision?

The size of the battery was determined by what we reasonably would need to allow us to remain in our house during an extended outage: water pump, refrigerator, air handler for our propane furnace, electrical support for our propane stove, and several general circuits for lighting, device charging, etc. (these are often referred to as ‘critical loads’). The cost of batteries is high, so we tried to keep the emergency power needs to a minimum.

How did the solar co-op process impact the installation of your solar and battery system?

We believe the co-op process gave us a more economical installation and resulted in a quality company to deal with.

What kind of maintenance and monitoring is required for operating your battery system?

I check the status of the battery when I walk by (it’s on the way to my car), and occasionally cut out the breaker switches on the main panel to assure that the backup is functioning.

What advice would you give to someone considering installing a battery storage and solar system?

Going with a co-op and the support it provides is advice I would offer. The co-op helps with the basic questions and requirements on the customer’s unique site to make an informed decision.

Is there anything else you’d like to share about your experience with the solar co-op and adding battery storage to your solar system?

In the three billing cycles since the system has been functioning, we have only paid the cost of grid connection to Dominion Energy – $7.00 per month.  Producing our own power makes me more aware of where it’s all being used, and where our home could be more efficient.