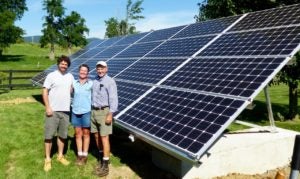 Bobby Whitescarver and his wife Jeanne Hoffman wanted to go solar at their home, Meadow View in Swoope, Virginia, but didn’t have the right roof for it. This wasn’t a problem, as he explains:

Tell me about your system. How large is it? When was it installed?

We went solar for a number of reasons. We wanted to be energy independent and use a cleaner source of electricity. This interest was further influenced by the local solar co-op effort in Augusta County. We saw how many people joined that group, and decided to go solar ourselves.

Can you share data on how your system has performed?

The system is still new, but it produces more than 6kw during the day’s peak sun.

Tell me why you went with a ground-mount system?

There were several reasons why we chose to have a ground-mount system installed. Our roof faces east to west. So the roof angle is bad for solar. We could have put some panels in the southern part of our yard, but trees there provide great shade for the house. Finally, we have a metal roof, so it is likely the panels would last longer than the roof itself.

Our installer came out to our property and found a great spot of land between our home and the road.

Describe the installation process for the ground-mount system

In total it took about four workdays. They began by installing concrete ballasts. They spent the first day setting up the forms for concrete and digging a trench for the wire that would come into the house. The second day, they poured the concrete. It took a week for this to cure. After the concrete cured they set up the array with panels and completed the necessary electrical work.

What advice would you give someone who is considering going solar?

Do some research on the Internet then call an installer for advice. Our installer gave us a proposal for a turn-key job. They were very professional and delivered everything they promised.