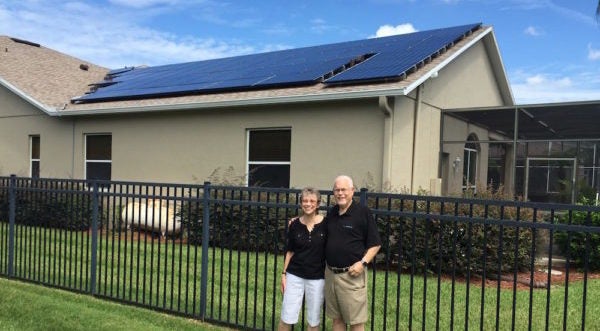 Winter Park Solar Co-op member Allan Gelb had solar installed on his home last November. His 11.7 kW system consists of 45 260-watt panels. We spoke with him recently about his decision to go solar.

We went solar because I decided that the technology had advanced to where it makes economic sense. With current low interest rates, investing in a solar system pays more “interest” than a bank. Protecting the environment is important, but I must say, it was not my prime motivation.

Using the co-op, the installation cost was 2/3 the cost of previous quotes.

My advice, to someone considering solar, is to Investigate at least two installers and join a co-op if possible. Investigate the products the installers propose using. Talk to people who have solar systems installed.

Has anything surprised you about the process?

My system really works as well as predicted! Even better!

Can you tell us how your system is performing?

For the six months the system has been in operation the comparative cost of electricity from the Orlando Utilities Commission are as follows: Before solar (a year ago) $1350. After solar (this year) $261 credit. This is a net savings of $1611.