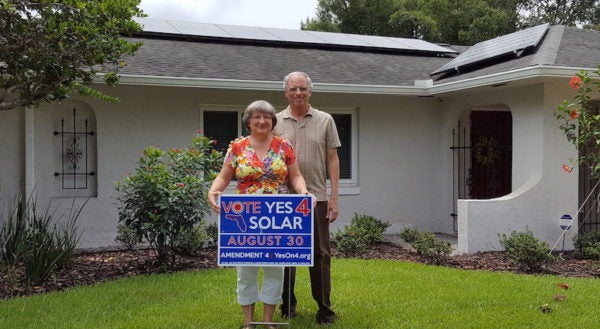 Mike and Marty are members of the East Orange Solar Co-op. They had their system installed in February. This is their story about going solar.

We were reluctant latecomers to our co-op. We believed that the cost would be too high, our post-hurricane Charley roof was too old, and our pool solar heater already hogged the sunniest area. However, in November, just as our friends’ co-op was set to close, we decided to ask for a free evaluation and proposal and found that we were wrong on all counts.

Our electric bill for last month was $9.88. It’s been that amount since our solar energy system was installed. And it happened only because we joined a solar co-op. About a year ago, some friends learned about a non-profit called Community Power Network in Washington, DC, that promotes the formation of local solar co-ops and they decided to start one. Using Community Power’s process, they formed a co-op to service Winter Park, Orlando, and East Orange County. Co-op members joined together to vet suppliers and negotiate terms and prices. They average 20% lower pricing compared to single-purchase installations. The successful supplier made proposals to members and worked out details through in-home meetings, closing deals with about 50% of them.

The cost of a system that would eliminate our $175/month bill was $16,800 after the federal income tax credit and the investment would pay back in 7-9 years, depending on the future cost of energy. If we sold early, the system would add to the resale value of our home. The co-op and installer had worked out an agreement to cover a removal and re-installation of the system when we next re-roofed. Finally, although we could have purchased a smaller system, we found a way to locate all the panels needed for a full-sized one.

The system was installed over several days (all components are outside of our house) and was inspected by the county and utility. We chose to remain connected to Duke Energy and pay $9.88/month for that service. If we need power from the grid, it flows in on demand. If we overproduce, it flows out. Duke installed a bi-directional meter and we are billed for the net monthly energy. Any excess is credited in kWh against future use. However, at the end of December, Duke will cash out any excess at their wholesale rate.

Our installation uses 40 panels and a 10 kW inverter to generate an average of 43 kWh/day. It has an Internet-connected monitoring function that shows the location, production, and health of each panel on a phone app. We did not purchase a storage battery.