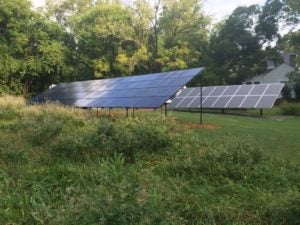 The Oak Grove Plantation serves guests interested rest and relaxation. It is also home to 48 solar panels, 32 of which were installed through the Halifax Solar co-op. We spoke with innkeeper Pickett Craddock about her system and the steps the bed and breakfast has taken to be energy smart.

When was your system installed?

Describe your system. How large is it? What products were used?

The panels are Axitec 250 watt, the two inverters are SMA Sunny Boy 4000TLUS with the secure power supply and the racking system is made by Everest.

When electricity was first installed (at Oak Grove) in 1905, it was powered by a sustainable windmill with a Delco battery in the basement. I wanted to follow in that tradition by going solar.

I wanted a sustainable energy source. I want to do my part to protect the environment. I also wanted to save money on electricity and to promote my bed and breakfast being environmentally friendly.

Why did you opt to go solar with a co-op?

I wanted to be able to add more solar panels and I happened to know Anya, who had been working on developing co-ops and she connected me with a locals doing a group purchase. Buying solar panels with a solar co-op is cheaper than doing it individually. VA SUN has been great about answering my questions too.

Forming a co-op is the way to go because it’s cheaper and VA SUN gives you lots of help with questions and evaluating installers. Buy solar now because the 30% federal tax credit expires at the end of 2016.

What surprised you most about the process?

The second time around, there weren’t any surprises. Though, the racking system on my 32 panels looks very different than my first racking system.

Can you share with us your monthly energy savings?

Why did you opt for the additional secure power supply?

A friend of mine, who is a solar installer recommended I do this. He suggested outfitting the system with a pair of inverters. These provide about about 4500 watts of PV power each. This gives me two emergency back-up power plugs that will work only when sunny for now. He said we could later add battery back up components (when batteries get more reasonable) that will work with 1 or 2 of the 4kW grid tied inverters.

Pairing with the inverters also makes sense for my installation because there are some shading issues. Opting for two inverters allows me to maximize my system’s potential.