When Exelon acquired Pepco electrical utility in 2016, consumer and clean energy advocates voiced our fears that the corporate giant would try to force D.C. area residents to subsidize their uneconomical investments, while also blocking residents from embracing solar and other affordable clean power technologies.

Now it’s clear that our fears were justified. In recent weeks, Exelon has made a series of outrageous dirty power plays to get what they want at the public’s expense.

First, it was reported that Pepco was running misleading Facebook ads urging people to support steps to weaken the “Clean Energy DC Omnibus Amendment Act of 2018,” the landmark bill which calls for DC to transition to electricity produced by 100% renewable (and non-nuclear) energy by 2032. Then, we learned late on Friday that Exelon privately convinced Councilmember Kenyon McDuffie (Ward 5) to introduce 11th hour amendments that protect their investments into the bill. Councilmember McDuffie chairs the Committee on Business and Economic development, which is set to vote on the Clean Energy DC Act TOMORROW, Tuesday morning, without any public scrutiny of these far-reaching Exelon amendments.

But that’s not all. Exelon is also trying to stack the deck in their favor by pushing their hand-picked candidates to control the District’s Public Service Commission (PSC), the agency tasked with regulating the corporation. In both instances, Exelon appears to enjoy the backing of Mayor Muriel Bowser and her allies on the Council. 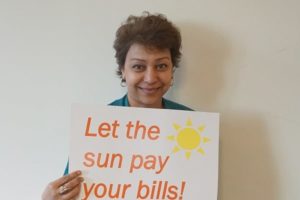 When PSC Commissioner Willie Philips’s term expired earlier this year, Mayor Bowser chose not to immediately reappoint him, as would be customary. The mayor instead called for new candidates. Several highly qualified candidates applied and at least four were interviewed. But after her reelection, Mayor Bowser reversed course. She nominated Phillips not only to another four-year term, but also to chair the commission. She also nominated Greer Gillis, who lacks experience in energy policy, as commissioner.

This is a shocking about face. Commissioner Philips voted to approve the Exelon-Pepco merger (which the Mayor’s office opposed), and he did so without demanding any changes at all. During the long merger drama, the rate increases that followed, and all the proceedings since, the only constant was Phillips’s willingness to do whatever Exelon asked.

The PSC will largely shape the District’s energy future. One of the key issues at stake at the PSC is protecting the public process to define the rules that regulate our local utility system for the next century. We’ve been following the proceedings—officially titled “Modernizing the Energy Delivery System for Increased Sustainability” or MEDSIS—from the beginning. They will decide whether and how true renewable technologies—solar, wind, electric vehicles, batteries, and “smart homes”—emerge in the market, and who pays, owns, and profits from these technologies.

The bottom line is that, through dirty tricks and power politics, Exelon is attempting to control D.C.’s clean energy market exclusively for themselves, without competition, at the literal expense of all D.C. residents.

Please take a moment RIGHT NOW to urge the Mayor and Council to block all Exelon amendments to the city’s 100% renewable energy legislation, to reject their hand-picked candidates to run the PSC, and to support a fair, stakeholder-driven MEDSIS process.

No private corporation should be allowed to dictate public policies, bypass stakeholder processes, and hand pick regulators. It’s bad for DC ratepayers, bad for local job-seekers, bad for democracy, and bad for our planet. The D.C. Council must make this clear.