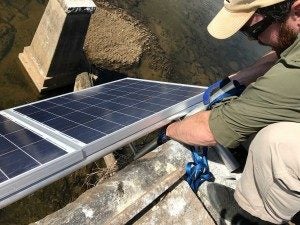 Richmond’s James River is home to an osprey nest in the heart of the city’s downtown waterfront. Viewers can monitor the process of the Osprey parents and expected hatchlings in real time thanks to a 24-hour live stream. This literal bird’s eye view is made possible thanks to a small solar system that uses solar panels and batteries to power the camera and communications equipment.

Ryan Abrahamsen and partner Andy Thompson decided to create the set up after being inspired by other similar efforts. Since Richmond is home to a vibrant outdoor community passionate about the river, they saw it as a natural fit and real asset to the community. “There’s nothing like this in the downtown area,” Abrahamsen said.

They quickly realized the only way to power the system would be with solar. The nest sits in the river on a 40-foot granite bridge piling that is 500 yards away from the nearest power source. The system is an example of an ‘off-grid’ application in which solar provides power when there is no grid connection or electrical service.

The system for the Osprey cam is designed to produce 35 continuous watts of power. This is enough to power a remote-controlled, 360º-view camera and radio that beams the video stream to two repeater base stations equipped with an internet connection to broadcast the feed. Energy generated from the solar panels is stored in a small battery that connects directly to the camera and other equipment. Abrahamsen says the system can stay powered for up to three straight days of little sunshine.

Abrahamsen and his crew purposely decided to over build the system so that they could ensure the camera system would always have power. They hope to add a small infrared light that will allow viewers to see the nest at night as well.

See below for a gallery of the installation process.