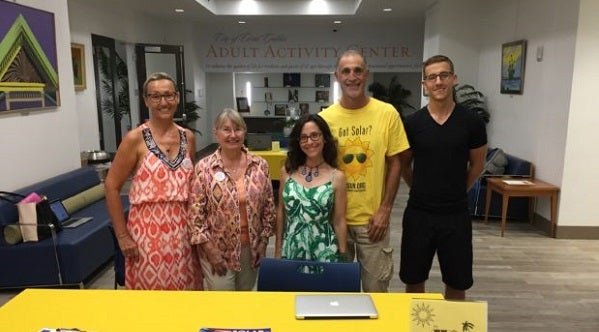 Celebrating the success of two recent solar co-ops, Miami-Dade residents are forming two more solar co-ops to help them pool their purchasing power and save money on their individual installation, while building a powerful network of solar supporters.

With the guidance of FL SUN, co-op members in Northern Miami-Dade and Southern Miami-Dade will learn about solar energy and solicit competitive bids from local installers to serve the group. Working together as a community, co-op members able to save on the cost of installing solar, obtaining high-quality products warranties through this bulk purchase process.

In preparation for the co-op and to further incentive their residents, Miami Shores has waived solar permitting fees. “We are proud to bring the concept of solar co-ops to our Village. Miami Shores has a history of being pro-active about our environment,’ said Alice Burch, Miami Shores Councilmember. “Now residents have more choices and opportunities to contract for affordable solar energy options.”

The partnership has already developed two of six solar co-ops rolling out over the next year. More than 150 homeowners joined the previous two co-ops and are helping FL SUN achieve its goal of installing 3.2 MW of solar capacity countywide.

“We believe that sound ecological health, supporting sustainability and greater resiliency, is the basis of a healthy community,” said Stephen Nesvacil of The Earth Ethics Institute of Miami Dade College.” Nothing could be more applicable to resiliency and Miami’s future than to support a renewable energy economy. We are proud to partner with the FL SUN Solar Co-op initiative now taking place in Miami-Dade County.”

Miami-Dade residents interested in joining a solar co-op in their area can sign up at the Miami-Dade Solar Co-ops page. Joining the co-op is not a commitment to purchase panels. Once the group is large enough, FL SUN will help the co-op solicit competitive bids from area solar installers.

Co-op members select a single company to complete all of the installations. They will then have the option to purchase panels individually based on the installer’s group rate. By going solar as a group and choosing a single installer, participants can save money on their installation

The co-ops will host several free solar information meetings as each co-op launches to educate the community about solar and the co-op process. The co-op kickoff information sessions are: