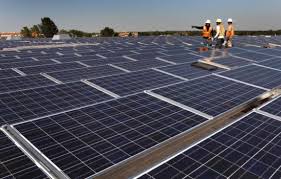 A report recently released by the Abell Foundation highlights an emerging consensus that solar power can play an invaluable role in low income neighborhoods by providing grid resiliency in extreme weather.  It also explores how solar power can create jobs and lower monthly electricity bills. The latter will increase in Baltimore in coming years — especially with the imposition of a controversial “infrastructure surcharge” that will charge ratepayers for services not yet received.

The report was written in response to a July 2013 heat wave which put massive strain on the electricity distribution grid and resulted in the death of 12 people in Maryland.  Defining the promotion of “stronger and more resilient communities as the core of community development,” it makes the following critical points:

The report also highlights groups across the country which are employing solar power as a tool for job creation, electricity savings, and building more resilient communities. One example is the California-based non-profit GRID Alternatives, the state program manager for the California Single-Family Affordable Housing Program (SASH). The program allows homeowners making less than 50% of local median income to receive a solar PV system free of charge and trains residents to secure jobs in the solar installation industry. Meanwhile, in Colorado, with support from the Denver Community Development Corporation, the Northeast Denver Housing Center installed solar systems on 30 housing units in 12 buildings while providing job training to neighborhood residents.

Essential to both of these projects is a financing option known as a “power purchase agreement,” in which a third party owns and installs a solar system on a customer’s home while guaranteeing a price that will remain below the customer’s utility rate. This guarantee is made possible by “net-metering,” which allows consumers to offset their monthly electricity bill with their on-site solar electricity production, and solar renewable energy credits (SRECs), which are purchased by utilities in states which have adopted Renewable Portfolio Standards, such as Maryland.

Another model which expands the benefits of solar power is known as “community solar.” Community solar allow renters, apartment tenants, and people with shady roofs to buy into in an off-site solar facility which they can use to offset their monthly bill through “virtual net-metering,” wherein the meter used to calculate the energy produced is not located at the subscribers residence but rather at the energy producing facility. Community solar legislation was adopted in Washington, D.C. and Colorado in 2013, among other locations nationwide.  A bill to make this approach possible in Maryland was narrowly defeated in committee in the MD legislature.

The report makes the following recommendations for Baltimore City and Maryland policymakers and leaders:

Are you interested in learning more about how solar power could benefit your community?  Click here to visit the Community Power Network’s website and learn more information about low-income solar project models or here for additional information on solar models that are currently in action in MD and related policy issues.