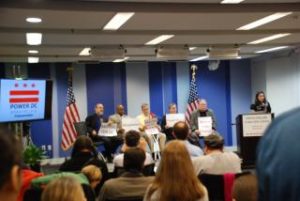 Regulators routinely approve mergers between utilities as a matter of course. Only twice in the last thirty years has a regulatory body rejected such a merger.

Merger opponents made it clear Exelon’s attempt to merge with Pepco was a bad deal for D.C. Exelon has significant investments in nuclear energy that are no longer profitable. Exelon’s sought to take over Pepco, and its two million strong customer base, as a hedge against the company’s expected generation losses.

Furthermore, the company has a history of opposing policies, like net metering, the wind production tax credit and renewable portfolio standards, that put competing renewable energy sources on a level playing field with the company’s nuclear generation assets. Exelon is also a major financial backer to the Edison Electric Institute and its “Utility Death Sprial” propaganda.

Despite these strong reasons to oppose the merger, activists still had a tough hill to climb. Pepco has a major lobbying presence in local District politics, as well as a network of community organizations that receive grants from Pepco. Pepco and Exelon spent heavily to influence local stakeholders.

But, local activists had a number of sources from which to tap public support. Chief among them were the District’s numerous solar co-ops. Since 2007, CPN project, DC SUN, has helped groups of neighbors to develop bulk purchase programs. These programs enable homeowners to go solar, and engage in public policy that supports clean energy.

Merger opponents were able to draw from this well of supporters. The group has a strong track record of making policy change.  In 2009, they secured legislation to strengthen the District’s SREC market, and with it make D.C. a residential solar leader. In 2013, they secured unanimous passage of legislation to create community solar, so that all District residents could benefit from renewable energy.

But activists saw that these past victories could be thwarted should Exelon come to town.  So they acted.

One critical tool in their tool belt is the requirement that the PSC must consider “environment and natural resources” in its deliberations. The District is unique in this respect. Renewable energy proponents enacted this language in 2008, as part of the Clean and Affordable Energy Act. In other jurisdictions, activists are often told: “we would like to listen to your concerns, but it is outside the scope of what we are allowed to consider”.

They developed a strong and broad coalition of activist groups from around the city who rolled out a robust ground game to demonstrate the high level of public opposition to the merger. They submitted thousands of comments to the Public Service Commission urging them to reject the merger.

They built grasstops support as well. The District is divided into 40 political jurisdictions known as Advisory Neighborhood Commissions. These locally elected bodies represent the interests of city residents. Merger opponents secured resolutions opposing the merger from 27 of these commissions. Not one commission passed a resolution in favor of the merger. Opponents also secured support from six of the District’s 13 Councilmembers. The other seven members remained publicly silent.

In its decision summary, the PSC noted: “this proceeding has generated more interest and more active participation by parties and interested persons than any other proceeding in the Commission’s more than a century of operations.”

This interest only happened because D.C.’s renewable energy activists built sustained support. They began by helping people get solar and used it to build real political power. Their success shows that our democratic processes can work. So often, public comment periods seem like symbolic window dressing on a foregone conclusion. This time, public activism made commissioners listen.