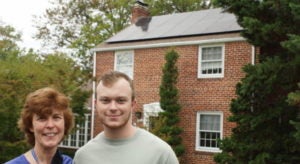 This month, VA SUN hit an impressive and important milestone. Our network of community-driven solar co-ops has helped put solar on more than 500 homes in Virginia. That’s three megawatts of solar in less than three years. This accounts for about a third of residential solar installations in Virginia since 2014.

In March of 2014, VA SUN began Virginia’s first bulk purchase program, working with a group in Blacksburg. Organizers had hoped to recruit a handful of people to take the solar plunge. On the first day alone, seventy people signed up to go solar.

“By the close of the program, we had blown past all our original goals,” said Carol Davis, Sustainability Manager for the Town of Blacksburg. “We more than quadrupled the amount of residential solar in the community.”

The success in Blacksburg drew interest from across Virginia. The program became a model of success that was soon replicated across the Commonwealth.

These co-ops have saved members $1.5 million on their solar purchases, generated $7.5 million in local investment and are building a constituency to fight for fair solar policies in Virginia co-ops. Thousands have joined the VA SUN network to help as either part of the co-ops or to fight for their solar rights and connect with a growing network of solar supporters. VA SUN also hosts a 620 member listserv as a practical discussion forum for solar in Virginia.

Since then, an additional 17 co-ops have formed in communities across Virginia. One such group recently completed the installation of solar on almost 50 roofs in Arlington.

VA SUN is currently hosting co-ops in the Middle Peninsula and Newport News. We are planning to launch multiple co-op in the central and Northern Shenandoah Valley. We are also looking for communities interested in hosting a co-op. If you’re interested, please reach out to Aaron Sutch, program director [email protected].

The co-ops have been successful in mobilizing a diverse constituency that is demanding its right to go solar. Together, this community is a strong force for change in Virginia. It is actively standing up to Virginia’s investor-owned utilities who actively deny us fair market access to solar technology.

“I think VA SUN is the most effective solar advocacy organization in Virginia,” said Tom Crockett of the Hampton Roads Solar Tour.

This work is starting to bear fruit. Nearly 2,000 Virginians have submitted the Declaration of Solar Rights to their state legislators. This statement calls for the legislature to changes rules that block our right to take control of the energy we use.