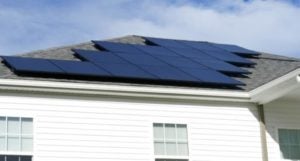 Previously, we looked at why Virginia’s large, investor-owned utilities want to deny us the right to go solar. Now, let’s look at how they do this. The utilities, with the help of their political allies in Richmond, have erected a series of legal barriers that protect their profits by making it more difficult for Virginians to benefit from solar energy.

The first barrier is the 1% cap on net metered solar that Virginia allows on the grid. Net metering is the process by which solar customers receive fair compensation from utilities for the electricity they generate. Virginia law allows utilities to stop making these payments once the amount of distributed (‘rooftop’) solar energy from homes and businesses rises above 1% across their service territory.

This cap is arbitrary and technically unsound. The electric grid can safely and reliably support at least ten times more solar than this cap allows. Utilities are using this cap to limit competition from solar. Doing so stops Virginians from benefiting from the job creation and energy choice that solar allows.

Virginia utilities have also backed laws that limit free market options for solar. Virginia’s investor-owned utilities are not required to allow for shared solar (‘community solar’) or third party leasing for residential solar systems. In other words, it is illegal in Virginia for you to lease solar panels on the roof of your home or for you to participate in group solar panel system. This is another anti-competitive rule designed to protect the utility monopoly. Imagine if automakers were able to ban people from taking taxis or from leasing vehicles in order to sell more cars.

Virginia’s investor-owned utilities do not only limit the total amount of solar we’re allowed to produce and how we produce it. They also set limits on the amount of solar Virginians can build on their own property. Utilities force residential solar system owners to pay a punitive and excessive “stand by charge” for systems over a certain size. Homeowners are also prohibited from building a solar system producing in excess of their previous year’s electric usage. These rules violate our right to be energy self-sufficient on our own property with our own money.

Breaking down these unfair barriers will require Virginia’s community of solar supporters to show the public and our elected officials that the utilities are supposed to work for our benefit, not the other way around. If the rapid growth we’ve seen in solar in Virginia is any indication, that message is starting to get through.

One way to make sure it does is to sign the Virginia Declaration of Solar Rights. This will let legislators know Virginians won’t be denied our right to go solar.