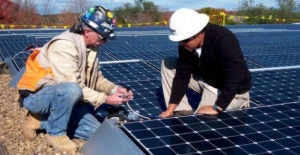 Today Virginia’s community of solar supporters issued a new declaration of solar rights aimed at ensuring fair market access for solar customers. Virginia’s unfair policies cause its solar market to lag behind its neighbors, despite the state’s considerable solar resources. The declaration comes as the Virginia General Assembly holds a joint session on Wednesday to discuss solar-related legislation. These bills could ease these restrictions and improve access to solar energy.

The declaration asks for three specific policy changes. First, it asks the General Assembly to lift the arbitrary 1% cap on solar that is allowed on the electric grid. The grid can safely and reliably support at least ten times more solar than this cap allows.

Finally, the declaration asks the General Assembly to stop utilities Dominion Power and Appalachian Power from imposing excessive fees and system size limits on solar users for systems on their own property. These anti-free market restrictions violate Virginians’ right to be energy self-sufficient.

The declaration is borne out of a desire among Virginians to generate their own electricity. They want to invest in solar, but are unable to do so because of the state’s anti-competitive energy market.