In the legislative fight over HB2201, we heard a lot from the power companies about subsidies and “cross-subsidies.”

Here’s the reality of energy subsidies (click on the image for a clearer graphic): 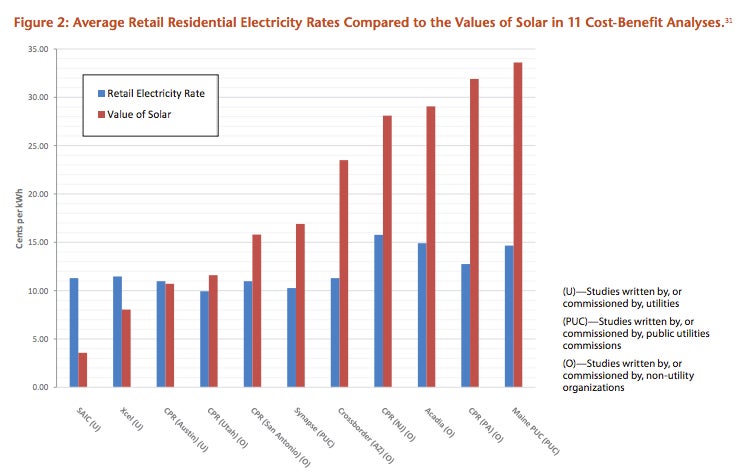 Here’s a link to the full report with details (and a clearer graphic that I didn’t have to blow up).

Here’s the meat of the report from the Executive Summary (I have emphasized what I believe to be the key points):

Applying a conservative approach, explained in further detail below, ELI found that
•The vast majority of federal subsidies for fossil fuels and renewable energy supported energy sources that emit high levels of greenhouse gases when used as fuel.
•The federal government provided substantially larger subsidies to fossil fuels than to renewables. Subsidies to fossil fuels—a mature, developed industry that has enjoyed government support for many years—totaled approximately $72 billion over the study period, representing a direct cost to taxpayers.
•Subsidies for renewable fuels, a relatively young and developing industry, totaled $29 billion over the same period.
•Subsidies to fossil fuels generally increased over the study period (though they decreased in 2008), while funding for renewables increased but saw a precipitous drop in 2006-07 (though they increased in 2008).
•Most of the largest subsidies to fossil fuels were written into the U.S. Tax Code as permanent provisions. By comparison, many subsidies for renewables are time-limited initiatives implemented through energy bills, with expiration dates that limit their usefulness to the renewables industry.
•The vast majority of subsidy dollars to fossil fuels can be attributed to just a handful of tax breaks, such as the Foreign Tax Credit ($15.3 billion) and the Credit for Production of Nonconventional Fuels ($14.1 billion). The largest of these, the Foreign Tax Credit, applies to the overseas production of oil through an obscure provision of the Tax Code, which allows energy companies to claim a tax credit for payments that would normally receive less-beneficial tax treatment.
•Almost half of the subsidies for renewables are attributable to corn-based ethanol, the use of which, while decreasing American reliance on foreign oil, raises considerable questions about effects on climate. [emphasis mine]

So now you have the facts whenever a legislator or your neighbor tries to claim that solar power gets all kinds of subsidies and can’t compete with fossil fuels.