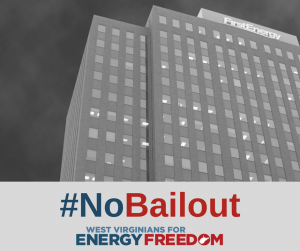 As Ohio-based FirstEnergy continues pushing its bad deal on West Virginia ratepayers, we’re fighting back. Over the past several weeks, momentum has continued to grow against FirstEnergy’s attempt to put us on the hook for it’s failing power plant.

On February 21 and 22, West Virginians For Energy Freedom members and advocate Debbie Dooley, founder of the Green Tea Coalition and Conservatives for Energy Freedom, met with state lawmakers to build support to defeat the transfer of Pleasants power plant.

Stockholders should pay the price for bad decisions, not customers.

West Virginians For Energy Freedom will host its first Community Conversation in late March. The first forum, co-hosted by Democracy For America, is 6 p.m. to 8 p.m. Tuesday, March 21, at The Caperton Center (Room 148), 501 W. Main St., Clarksburg. Door open at 5:30 p.m. Refreshments will be provided.

“We hope everyone from homeowners to business owners will attend to find out what the sale would mean to their monthly electric bills,” said Karan Ireland of WV SUN, who will lead the discussion in Clarksburg.

The second Community Conversation will be in Morgantown the following week. More will be scheduled throughout Mon Power’s coverage area in the spring and summer.

The coalition has more than tripled since the launch. The latest members include League of Women Voters of West Virginia, Suburban Lanes in Morgantown, and Clark A. Dixon Jr., Potomac Valley Master Naturalist Program chairman. Visit www.EnergyFreedomWV.org/coalition to see the full roster of members.

A weekly “Follow The Money” social media campaign launched March 2 and will highlight the ways FirstEnergy will benefit from moving ownership from a deregulated market to a regulated one.

Mon Power is expected to file its petition to purchase the Pleasants plant on March 15, 2017, with the Public Service Commission of West Virginia. After filing, the Commission likely will publish a schedule for the case. “We expect that the PSC will reach a decision in the first quarter of 2018,” Ireland said. There will be opportunities throughout the case for public comment and public hearings.