The Solar Energy Industries Association (SEIA) is the voice of the solar industry. Its members include manufacturers, distributors and installers. Recently, the organization put out its first guide for solar homeowners. We spoke with Tom Kimbis, SEIA’s Vice President of Executive Affairs and General Counsel, about the guide and how the industry is working to make sure that its customers are well-served. 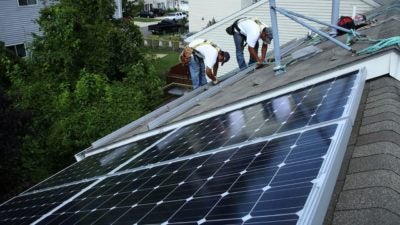 What do you hope the guide accomplishes?

We want to address consumer-oriented issues in a way that increases understanding of solar by consumers and our own members.

What are some common misconceptions homeowners might have about solar?

We’re making a lot of progress as an industry in educating consumers, but there is still a long way to go. From SEIA and the industry’s perspective, an educated consumer base is better for both consumers and the industry as a whole. We want consumers to fully understand their solar transactions and be comfortable with them.

For many residential consumers considering solar, it’s the first time they are spending time thinking about electricity costs and where their electricity comes from. When they sit down with a solar company, there are important issues to consider, such as who owns the system, financing terms, and the length of the agreement.

We’ve also found some consumer misperception about solar operating in the absence of grid power. Many consumers think they can operate in absence of grid power, which is not the case for the majority of solar customers who don’t include onsite storage with their system.

What should homeowners be looking for in an installer?

It’s very important for consumers to think about choosing solar as serious investment, much as they would other major home improvements. This means getting multiple bids, calling references, contacting their local Better Business Bureau. I would urge consumers to carefully review the financial options that are available to find the one best for them. Consumers shouldn’t enter a transaction until they feel fully comfortable with the solar company and the terms. That said, solar is an affordable choice for millions of Americans.

Solar has grown rapidly in recent years, what is the industry doing to maintain quality service?

SEIA has maintained a code of ethics for a number of years. This has been helpful as an aspirational and enforceable document. Every SEIA member company signs an agreement to abide by the code. But as the industry grows, we want to do even more to show leadership in consumer protection.

The residential guide we recently released puts key information directly in the hands in the consumers. It covers most of the areas that consumers need to know in going solar.

We also intend to publish additional tools covering advanced areas, as well as guides directed at those who are already in the solar industry or who want to join. This way they’ll learn best practices in consumer protection right from the beginning. We’ve also embraced some of the work that NREL and corporate partners have done in developing standardized contracts, available on the SEIA website.

How can individuals and communities better educate themselves about solar energy?

The SEIA residential guide is a good introduction. I’d also point to the DSIRE database. This has a lot of information relevant to state and local policies. The Department of Energy website provides detailed scientific and technical information about solar for those interested in that aspect of solar systems.

What are some things a solar customer, or a potential solar customer should know about working with an installer to make sure their installation goes smoothly?

Make sure to maintain regular communications with your solar company so you know your installation timeline and can resolve any issues that arise quickly. For instance, because solar is growing so quickly, there could be lag time in getting your system installed, either due to pure economic demand or city/county permitting rules and/or utility interconnection delays that are out of the installers’ control.

Many of our members are interested in joining with their neighbors to go solar, either in a co-op or in a community solar project. What advice would you give to them about selecting an installer or developer?