The solar panels on Anya Schoolman’s roof in Mt. Pleasant generate a third to two-thirds of her energy a month. Her neighbors have even more advanced arrays.

Check out the full radio piece at WAMU 88.5

If you stand in the middle of Northwest D.C.’s Mount Pleasant neighborhood, there are solar panels on rooftops in almost any direction you turn. That’s thanks in large part to Anya Schoolman, a woman you might call the mother of D.C.’s solar movement.

Schoolman founded the Mt. Pleasant Solar Cooperative in 2007 and now leads an organization called DC SUN, which stands for DC Solar United Neighborhoods. The group has helped neighborhoods in all eight wards with bulk purchasing of solar panels. Schoolman says residential solar in the nation’s capital has taken off, and going forward, might only be limited by a finite amount of rooftop space.

“We are very space constrained — and so it’s a slow, steady, meticulous growth — but we are one of the most densely solar cities in the United States,” Schoolman says.

Schoolman says she’s been pleased with the steps Pepco has taken to prepare the grade for the next generation of energy.

For one thing, Pepco has gotten federal grants to explore how to make D.C.’s grid more friendly to two-way energy traffic — something that’ll be necessary if more and more customers choose, like Schoolman did, to produce their own power.

How does rooftop solar work?

What Exelon means for solar

Schoolman says her small rooftop array, and those of her neighbors, can be a model for the future of energy, but she’s also worried these days. She’s convinced that a proposed merger between Pepco and national energy giant Exelon will stifle change.

“The more we learn, the more we feel that this is a terrible, terrible deal for D.C.,” Schoolman says.

It’s not as if residents have been singing Pepco’s praises in recent years. Public perception of the utility bottomed out in 2012, when Pepco’s slow response to outages left thousands of customers without power for more than a week.

“Pepco has definitely improved. And they have improved — I’m sure they won’t say this — primarily in response to the public outcry as well the efforts of this office,” says Sandra Mattavous-Frye, the People’s Counsel of the District of Columbia.

Her job is to represent D.C. residents in any matters affecting telephone, gas or electric service. She, like DC SUN’s Anya Schoolman, is opposed to the Exelon-Pepco merger, citing concerns about rates, reliability and, yes, the effect of Exelon’s arrival in D.C. on renewable energy in the nation’s capital.

“They have a basic, you know, opposition to aggressive renewables and sustainability,” Schoolman says. “This company is very, very different from Pepco. Pepco doesn’t own generation. Their job is to buy energy from the best place they can, sell it to us, and to manage the lines.”

It’s true, a huge portion of Exelon’s business is generating power, and that includes the nation’s largest collection of nuclear reactors: 23, to be exact, across six different states.

Dave Velazquez is the Vice President of Power Delivery at Pepco Holdings, Incorporated, and he sees the proposed merger through a different lens.

Velazquez, by the way, isn’t just speaking for Pepco these days. When I contacted Exelon about this story, the company pointed me in his direction as well.

“Exelon is not inherently opposed to renewable energy. They have both wind and solar in their portfolio,” Velazquez says.

It’s a pretty exciting time. It’s a pretty big change for the industry. Lots of people are installing solar and other distributed resources, both homes and businesses,” he says.

“We are still governed by the laws of physics and the way electrons flow, so in some cases we can’t always accommodate everything that someone wants to do with the grid, but we very much are able to accommodate new technology and new resources,” he adds.

But DC SUN’s Anya Schoolman says you only have to look at Exelon’s business model to see how friendly they’re likely to be to policies that encourage the growth of residential solar and wind programs.

Whether Exelon is generating energy from wind, solar, or fossil fuels, she says the company relies on large power plants, often far away from the cities that they serve, along with expensive transmission lines to deliver that power.

“We’re not interested… that’s the old model. We’re interested in being able to invest our own money to put solar on our own roofs, for us, so that the jobs and the economic benefit are local,” Schoolman says. “What we’re facing is a revolution in how the grid is structured. And yet it’s diametrically opposed to their business model.”

And Pepco, for the many gripes local residents have had with the company, is local. And that, Schoolman says, is significant.

“Even though we have a love-hate relationship with Pepco — and for many people it’s hate — they are a local company and they are responsive to local issues,” Schoolman says. “With a company like Exelon, we are a drop in the bucket of the largest utility in the United States. Their headquarters is in Chicago, and if something needs to be done it’s not first priority, it’s not second, we might be 23rd or 52nd on their list.”

Whether that’s a good or bad thing will ultimately be up to public service commissions in D.C., Maryland, and Delaware, which all have to approve the merger for it to go through. 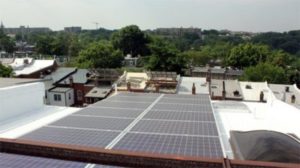