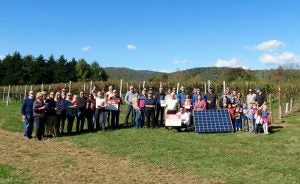 Now we want to switch to solar for our winery!

We had been thinking about solar for several years for several reasons. Our primary reason is sustainable power to our home without harming the environment. For example, generating our power needs without carbon emissions that come with fossil fuels. We also knew that we would save money (i.e. energy costs as we get older and have less spending power).  Yes, we knew there was a large dollar investment up front but we also knew that the costs COULD be amortized over some period of time. We were also “vaguely” aware of some government incentives for going solar.

There were also lots of questions to be answered before we went solar such as how much power would our home require; cost of a full system, partial system; where could we mount the system for maximum efficiency; exactly how did government incentives work; how efficient were solar cells; what was their life cycle and did their efficiency decrease with age; and so on. In short, we were thinking solar but really didn’t know where to find answers to all our questions. Then a friend who recently moved from NOVA out to Rappahannock told us about this solar co-op he had read about in Washington, D.C. and that he was working with the co-op to give a presentation to interested home and farm owners in Rappahannock County.

So, when RLEP (Rappahannock League for Environmental Protection), our local environmental organization got involved to help promote a solar co-op in our community, we attended this wonderfully informative brief given by Aaron Sutch along with some energy reps. After 2-3 hours, all of our questions and much more were answered by the presenters and we were excited. We were even more excited to learn that we could benefit from these professionals throughout the installation process (from putting bids together to select the best installer to actual installations) if we were able to form a solar cooperative in our County. We consider ourselves lucky that many fellow citizens felt the same way and we came together as a team to form the Rappahannock Solar Co-op.

Under Aaron’s guidance, we then put together a competitive bid for a qualified solar installer that our citizens could use. The company chosen by our co-op, Independent Solar Solutions (ISS) has been and still is excellent. After a thorough site survey including system tradeoffs in terms of size and optimal location, they performed a very professional installation. It included remote system monitoring. The installation and power company approval went flawlessly.

We were very surprised when our first electric bill (circa November 2015) was reduced by some $75. We did encounter a problem during last summer when I noticed our energy usage was higher than the same time the previous summer. At this time, we did not yet have the solar remote monitoring system in place because we do not get very good internet service in our part of Rappahannock County. I finally contacted both our ISS representative and our co-op rep, Aaron. They both communicated and confirmed there was a problem.  ISS then sent reps to our home to check out the solar system. Turns out the solar panel output cables on the roof, which carry energy to our inverter, have fuses and the fuses were blown.  We determined the fuses had blown back in a May thunder storm. ISS not only replaced the fuses at no cost but reimbursed us for two months of electric company bills. They also installed a power booster so we could go online with their remote monitoring system. I now make it a habit both go down in my basement to read the solar panel status, plus visit the solar monitoring site weekly to insure the system is functioning properly.  I cannot speak more highly of the benefits you will receive by having a co-op in your community and choosing a company such as ISS. We do hope the government incentives will continue …or new ones emerge as we start saving and thinking about putting up solar for our winery.