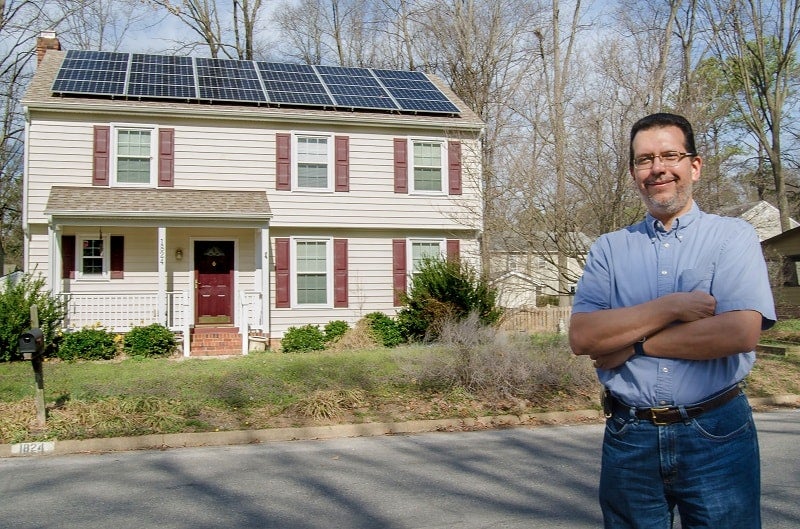 Our rooftop panels look GOOD! Our neighbors ask about them.

We believe we should decrease our use of non-renewable resources. We have an all-electric vehicle, and going solar was the next logical step in trying to walk (and drive) lightly on the earth.

The co-op made sense in so many ways. The information sessions provided most of the information we needed to decide to go solar. It allowed us to get a really good price with an excellent installer that was researched and selected by the co-op members.

Go to an info session, learn all you can, and talk to people like us who’ve taken the plunge. But most importantly, just do it!

We were surprised at how effortless it was. The only hard part was deciding to do it. The other surprise was how much we like the look of the panels on the roof. They’re actually really good-looking.

We have an app that let’s us track how much power we’re generating and see the historical data. It’s fascinating to see the hourly and daily graphs and how that data correlates with the weather.

Our system was sized to cover about 65% of our average annual electricity usage. It’s hard to compare with less than a year’s data because of the weather’s impact on electric bills, but in the eight months we’ve had our system, the total decrease in our electric bill has been about 45% compared to the same months in the prior year.

Over the winter, the weather was cold but also often overcast, which reduced the system output, but beginning in late Feb, our output has dramatically increased to the best output so far. We’re expecting our spring and summer bills to decrease a lot more than we’ve seen to date.

Many of our neighbors stopped by to ask about the solar panels.