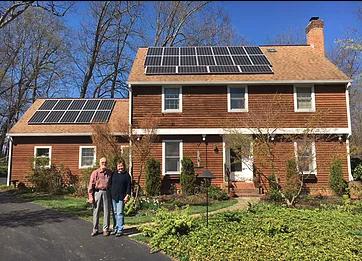 My reasons for installing the PV system are, in order of importance:

– To reduce the carbon that we put into the atmosphere. I also drive an electric car, a 2015 for that reason.

– To reduce the monthly cost of electricity, especially if I should expire before my wife.

– To provide clean energy for my electric car.

– To reduce our support of the fossil-fuel industry.

– To encourage neighbors and friends to install PV systems.

The house was built in 1983, so the windows are double glass. Before installing the PV system an energy audit was done to discover changes that needed to be made and fix them, high-efficiency heat pumps were installed, the attic and crawl space were insulated and mostly LED lights were installed.  Installing a PV system was the logical next step.  The neighborhood organization of Hethwood quickly approved installing the system and the two additions to it. The next step will be to install a lithium-ion battery in the garage to supply electricity for kitchen appliances and a heater in cases of power outage. Because of my very positive past experience with Baseline Solar Solutions, I chose that company to install our PV system.  They are true experts at installing PV and thermal solar systems.

I had been wanting to install PV on our house for a few years, especially after I started driving an electric vehicle in 2012. I was elated when I learned the co-op was being organized. I went to all of the informational meetings and signed up early. The idea of many houses having PV installed in a short period of time was obviously going to reduce the cost because of bulk buying of the materials and of the installation because of the proximity of the houses. Also, there was a community spirit involved in so many home owners installing PV at about the same time.

I have a detailed web page about our PV system: http://www.roperld.com/science/RoperPVSystem.htm