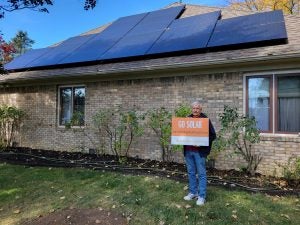 We moved to our house in Zionsville, Indiana, in November 2021. At our previous house in Oak Park, Illinois, we had a 2KW system installed in 2015 that paid for itself in those six years. We wanted to replicate not only the savings on electric bills, but to continue to reduce our carbon footprint as much as possible. When I saw the promotion by Solar United Neighbors, and the push for more residential solar by Zionsville, I decided to move ahead with the installation of a new system.

I had read about the difficulties encountered by many when it came time to get permission to install residential solar involving HOA approval. However, in our case, the approval was extremely easy and much quicker than I anticipated. The result was that we were able to get our system installed and activated before the end of June, when the expiration of conventional net metering in Indiana occurred.

Have any of your habits changed since going solar?

Since we had solar before, we were already attuned to conserving electrical usage as much as possible. We switched to LED lighting throughout our house and removed an inefficient electric oven, replacing it with a new more efficient model. I already had a plug-in hybrid vehicle, so, since most of our driving is local, we continue to keep our fossil fuel consumption to a minimum.

Have you seen electricity savings since going solar?

Since installing our solar panel in June, our monthly electric bills for each of the first four months, have averaged about $8.00 – which is the cost of being a customer. We currently have accumulated a good sized surplus, and it will be interesting to see what our costs will be for a full 12 months. We are hoping to come close to 100% coverage of our yearly electrical consumption from solar production.

I have joined the Solar United Neighbors Indiana Solar Action Team and look forward to working with the team on solar advocacy in our community.

My advice is to do your research, especially for the feasibility of solar on your roof, and if you are considering solar, go with a reputable company. Beware of promises of free solar installations! Look at the long term benefits for the environment, and for your electrical costs. Specifically, we need to vote for representatives that will work towards legislation that will overturn the current state of net-metering in Indiana, which is almost entirely in favor of the power companies. 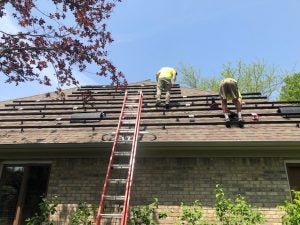 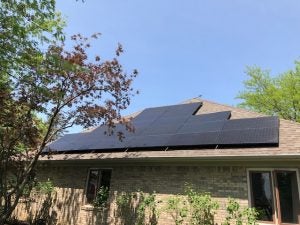