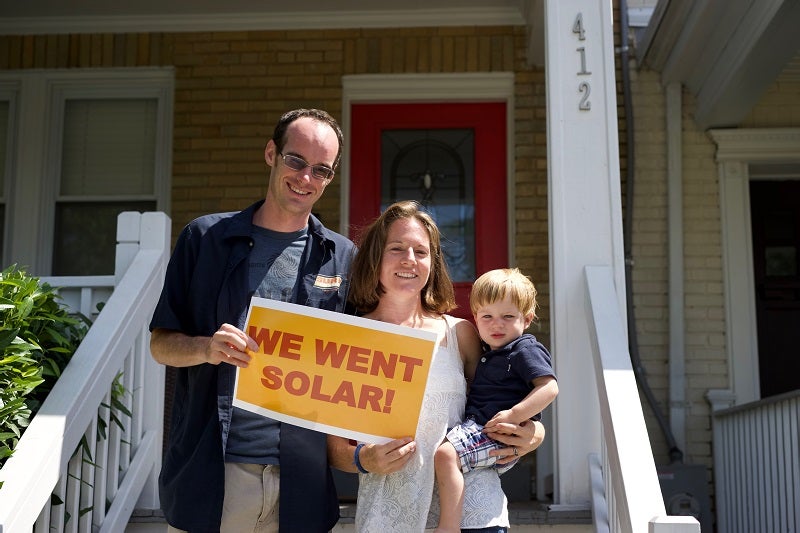 Mark: We are concerned about the health impacts of air and water pollution and climate disruption caused by dirty energy sources like coal, so we wanted to do our part to make a difference when we bought a home. We’ve kept up on the plummeting cost of solar panels, the status of the federal investment tax credit, and the nation-leading clean energy policies that the D.C. Council has established, so we knew going solar now would be a great financial investment as well. But honestly, we were both tired of Nicole telling me to set the thermostat lower in the summer and higher in the winter.

Nathaniel: I just turned two, so I don’t really have an opinion on any of this. The eclipse was cool though, and it sure is nice to have the home a bit less hot in the summer and warmer in the winter.

Mark: Some of our friends and colleagues had participated in the co-op previously, so we knew it was easy and cost effective. With our collective bargaining power we knew the co-op team was getting us a great deal and we didn’t have to negotiate any of the contracts or details. We just picked the options that worked best for us: the type of panels, how many, the financing, and what to do with our solar renewable energy credits, and they took care of the rest! We are also big fans of the co-op’s effective advocacy in the District for its members and clean energy.

Nicole: There’s no guesswork with the Co-op – you know they’ve done the research and you’re getting the best deal out there.

Mark: How much fun keeping closer track of our energy use is, the hourly monitoring of both use and production is fantastic. Nicole spent the first month checking the app daily, figuring out which appliances used how much energy and predicting what our solar production would be or had been based on the weather.

Mark: We haven’t had to pay an electric bill since we went solar – every month has been negative!  We’re an all-electric system so we’ll make that up this winter during heating season, but it has been wonderful. I did turn down the thermostat a couple of degrees this summer compared to last, and we’re planning to get an electric car when our current one needs replacing.